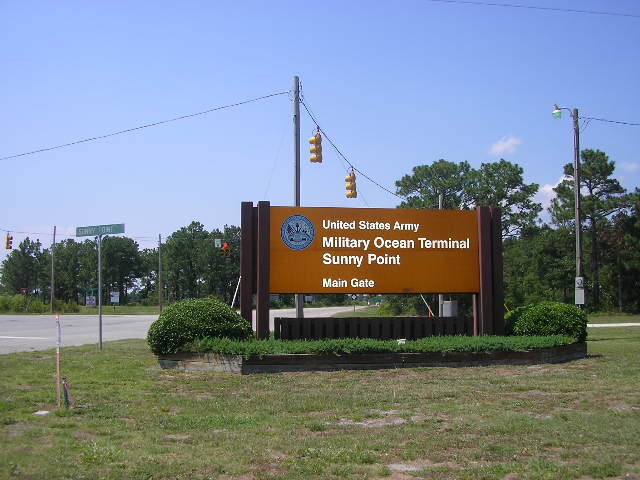 Military Ocean Terminal Sunny Point, also called MOTSU, has been the primary terminal for the shipment of weapons and ammunition for the military for many years. This facility one of the busiest military terminals in the world. Military Ocean Terminal Sunny Point also one of the most secure military facilities in the country. The base is operated by the 596th Transportation Brigade. No one that is not actively assigned to the terminal as permanent party is allowed on the facility. Even retirees and families are not allowed on the base even with a dependent ID or a retiree ID.

Military Ocean Terminal Sunny Point occupies a unique location. This base is the primary military shipping point on the Atlantic coast and it’s the Army’s primary deep water port. MOT Sunny Point is situated on an 8,500 acre site on the banks of the Cape Fear river in North Carolina. There is an additional 2,100 acre buffer zone on Pleasure Island. The base is 26 miles from Wilmington, North Carolina.

Sunny Point has been a military shipping port since the 1950s. But the location has been used to ship weapons and ammunition since the 1700's. It was a key strategic port during the Civil War. It was a critical shipping point for the military during both the Vietnam War and Persian Gulf War. During the wars in Afghanistan and Iraq ammunition, weapons, and other gear arrived by truck and rail constantly to be loaded and shipped overseas. Sunny Point Military Operating Terminal is critically important to the ability of the military to fulfill its mission and make sure that service members have the ammunition, weapons and supplies they need to do their jobs when they are tasked out overseas.

When arriving at MOTSU most service members fly to the Wilmington, NC airport and take a shuttle from there to the base.

For service personnel working at Military Ocean Terminal Sunny Point the closest towns are Southport and Oak Island. Some choose to live in these areas to be closer to the base and there are many home for sale and rent in the area. But most of the people who work at Military Ocean Terminal Sunny Point live in Wilmington, NC. Wilmington is the 8th largest city in the state and has a population of about 100,000 people. The weather is temperate and mild for most of the year. The area does get a little chilly in the winter and can sometimes receive snow, although it’s unusual.

The area is known for having gorgeous beaches and lots of fantastic outdoor activities. It also has stunning Southern architecture and a rich history. Tours of the Wilmington Historic District highlight some of the area’s oldest Southern plantation homes. Horse drawn carriage tours of the area make the colorful history of this port city come to life. The Airlie Gardens and Bellamy Mansion are also worth touring.

Wilmington has many great colleges and the job opportunities for spouses are plentiful. Wilmington is a great combination of Southern charm, Southern history, and modern city living.