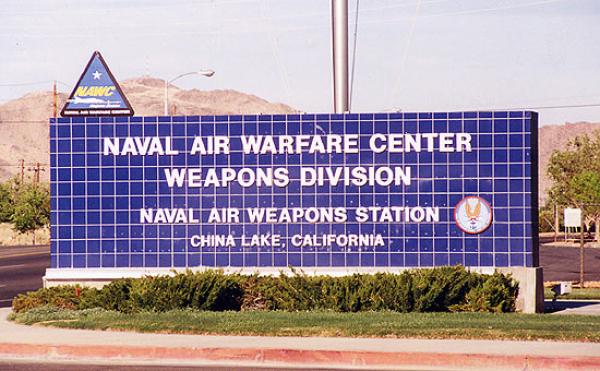 Located in California, the Naval Air Weapons Station (NAWS) China Lake sits about 150 miles outside of Los Angeles. NAWS China Lake ensures the proper maintenance of land and various facilities under the Navy's research, development, acquisition, testing and evaluation (RDAT&E) umbrella of new weapons technology. NAWS China Lake makes up 85% of the land the Navy utilizes for RDAT&E and covers more than 1 million acres in the western Mojave Desert.

China Lake was established in November 1943, as a Naval Ordnance Test Station (NOTS) and has become a global leader in the research field. China Lake controls 19,600 square miles of restricted airspace—roughly 12% of the state's total airspace. China Lake also controls Edwards Air Force Base and Fort Irwin; all three installations make up the R-2508 Airspace Complex.

During World War II, the California Institute of Technology (Caltech) needed the space and facilities to test rockets at the same time that the U.S. Navy needed a proving ground to test aviation ammo and weaponry. Caltech Physics Professor Charles C. Lauritsen and U.S. Naval Officer Sherman E. Burroughs, Jr. decided to collaborate on building a space that would suit their mutual needs.

Within a month of opening, weapons testing was already underway at China Lake. Because it had a history rooted in collaboration with Caltech, this installation continued to work with civilian scientists and engineers which has helped make it the research and development powerhouse that it is today.

Notable achievements and occurrences include the development of the 9 Sidewinder short-range air-to-air missile which was created at China Lake in 1950 (and remains in use more than 60 years later) and a visit during the summer of 1963 from President John F. Kennedy. Other weapons that were created at China Lake include: the BOAR (Bombardment Aircraft Rocket), the China Lake Grenade Launcher, the Gimlet Rocket, the Tomahawk Missile and the SLAM-ER (Standoff Land Attack Missile - Expanded Response).

China Lake has a long-running history of cooperation alongside civilians not only on site and in research labs but within the general community as well. Created in 1946, "The China Lake Way," formally known as the "Principles of Operation" dictated that leadership of the site was to be jointly shared by a Naval Commander and Technical Director. Over time, adherence to the Principles of Operation dwindled and in 1976, the Principles were removed before being rewritten (but not reinstated) in 1980.

Because much of the land encompassing this installation isn't developed, wildlife thrives; feral horses and donkeys, Big Horn Sheep and the Desert Tortoise are among more than 340 species of animal and over 600 types of plants who live an grow on China Lake's grounds. Animals and vegetation are only part of China Lake's fascinating makeup; there are petroglyphs (rock carvings) on site that are available for public viewing. Little Petroglyph Canyon exhibits 20,000 images (dates of origin remain unknown) and was named a National Historic Landmark in 1964.

Today, China Lake is home to more than 4,000 civilian employees, approximately 1,700 contractors and over 600 active duty military personnel who all work on site.

The NAWS China Lake Commissary can be reached at (760) 939-0002. The commissary is closed on Sundays and Mondays and open according to the following schedule: Tuesdays 8a-6p, Wednesdays 10a-6p, Thursdays 10a-7p, Fridays 9a-6p and Saturdays 8a-5p.

Hotels near China Lake include various options ranging from budget-friendly to five star. They include:

Each offers free wi-fi and breakfast with your stay and are within a 15 minute drive of China Lake.

The China Lake installation is within 1-4 hours of various attractions and points of interest including theme parks, beaches and major cities. You can make it to the Las Vegas Strip in approximately three and a half hours by car and Disney is about three hours southwest of the base.

You can also visit the Sequoia National Forest for stunning views of untouched nature and check out the Boole Tree, the sixth largest tree in the world; all a mere hour away from China Lake.

There are two schools on-site at China Lake both of which are part of the Sierra Sands Unified School District (SSUSD):

Cerro Coso Community College (760) 384-6100 is within half an hour of China Lake and offers tons of programs, classes and services for their current and prospective students.

China Lake has fitness centers, an 18-hole golf course, pools, group exercise classes and offers discounted tickets for attractions throughout California and Nevada via the Tickets and Tours Office (760) 939-3006.