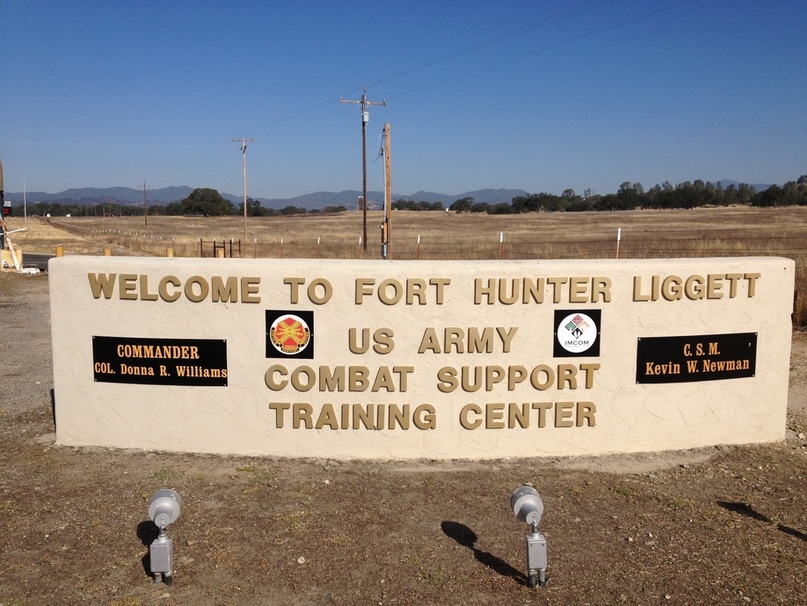 Fort Hunter Liggett is located in Monterey County, California. It is 250 miles north of Los Angeles and 150 south of San Francisco. It is the largest installation in the Army Reserve, with more than 165,000 acres of mountains, valleys, rivers, plains, and forests that provide an ideal maneuver area in order to meet today’s rigorous training requirements.

In 1940 the War Department purchased over 200,000 acres of land between the Salinas River valley divide and the Pacific Ocean. This was in anticipation of training soldiers for combat on World War II European fronts.

Until the 1990s, the base served primarily as a training facility for the 7th Light Infantry Division and the Training and Experimentation Command (TEC). The mission of TEC was to evaluate new Army and Marine Corps weapon systems by providing simulated opposing forces. In 1997 the TEC at Fort Hunter Liggett was deactivated as a result of the Army’s continuous efforts to reorganize for efficiency as it downsized. This ended a 40 year history of test and experiments for the U.S. Army conducted at Fort Hunter Liggett. Some 183 military and 25 civilians were reassigned or transferred to other jobs.

For more information on the history of Fort Hunter Liggett, check out the Heritage Center that was established in 2016. The Heritage Center showcases the post military history with information panels, videos, documents, and WWII artifacts. It is open on Wednesday, Friday, and Saturday from 1 p.m. – 4 p.m.

The Fort Hunter Liggett Medical Aid Station provides level 1 care to include screening and minor treatment (sick call) to Reserve Component Soldiers who are on orders performing Annual Training requirements of 29 days or less. Annually, they provide care to 5,000-6,500 Soldiers in training.

The Fort is surrounded by mountains, nature and wildlife. The peaceful setting offers plenty for outdoor enthusiasts but is also relatively close to popular beaches and vibrant Bay Area cities such as San Francisco, Oakland and San Jose.

Fort Liggett also offers camp ground sites to accommodate all styles. They have great areas for pitching a tent or hooking up RVs and trailers (electricity and water hookups available).

They have a paintball course on site. For reservations, call FT. Hunter Liggett MWR.