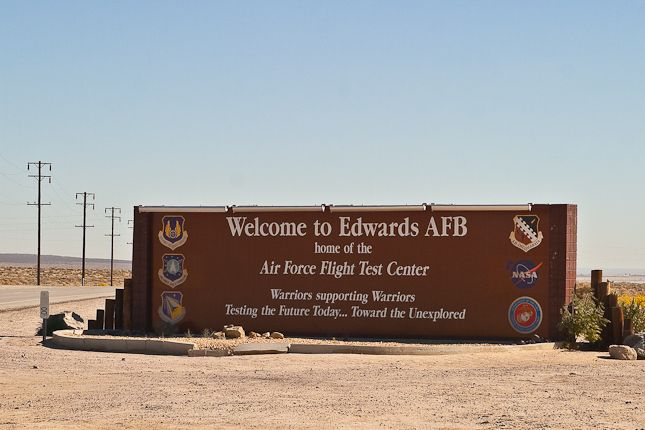 Edwards Air Force Base is located in sunny southern California - 100 miles northeast of Los Angeles. Edwards AFB spans over 300,800 acres in three counties, making the base 12 square miles larger than the city of Los Angeles. The official mailing address of the base Post Office is 20 W Popson Ave, Edwards Air Force Base, Kern County, California, 93524.

Edwards is the second largest Air Force base in the country, home to over 2,000 people and around 500 families. The Air Force Test Center, which has test flown every aircraft occupied by the Air Force for over 70 years, is situated on the base. The highly classified Air Force facility, well known as “Area 51”, is a detachment of the base in nearby southern Nevada.

The current site of the Edwards AFB was originally a water stop for steam trains to replenish water. In the early 20th century, settlers began to build a small community on the location known as “Muroc”. As California quickly became more populated, 1st Wing Lieutenant Colonel Henry Arnold realized the need for a bombing range away from populated areas. In 1932, Arnold acquired land next to the Muroc Dry Lake to build the range. A facility, “Muroc Field”, was established to support the range.

By the end of the 1930s, the range began to grow in size as the Army Air Corps began to use the grounds for research and development. Muroc Field drew attention for its dry lake, as it was very flat and seen as a potential runway. Over $120 million was spent in the development of the base.

After the U.S. entered World War II, the 41st Bombardment Group, 30th Bombardment Group, 2d Reconnaissance Squadron and the 6th Reconnaissance Squadron were stationed to the renamed “Muroc Army Airfield” base. The primary mission of Muroc was to provide final combat training for bomber and fighter aircrews prior to overseas deployment. Typically, newly graduated pilots would be trained to fly aircraft used in war for 2 to 3 months. Muroc AA was also used to test highly confidential aircraft developed during the war. The base was hand picked due to its isolation and warm weather.

As the war concluded, the Muroc Army Airfield was placed under the control of the Air Technical Service Command. The primary use of the base continued to be testing aircraft, including the newly developed Lockheed P-80 Shooting Star, Consolidated Vultee XP-8P, and XP-84 Thunderjet fighter. Aeronautical concepts were also experimented on during this time. In 1947, a small airplane was flown over the base that exceeded the speed of sound for the first time in history. A missile test facility, titled the “Experimental Rocket Engine Test Station”, was constructed by the end of the decade.

The base was renamed “Edwards Air Force Base” in 1949, in honor of Captain Glen Edwards. Edwards was a test pilot for the Air Force and spent a majority of his time at Muroc. During a test flight of a Northrop YB-49, the aircraft crashed and Edwards was instantly killed.

In the early 1950s, the Air Research and Development Command gained jurisdiction of the Edwards AFB. The U.S. Air Force Test Pilot School moved to the base, focused on performance testing, stability, and control. Meanwhile, the pilots at Edwards continued to set historic records. Edwards AFB was named the official Air Force Flight Test Center in 1951, testing every single aircraft produced by the U.S. Air Force. Throughout the decade, the center tested the first series of supersonic fighters and played a major role in developing systems that gave the U.S. intercontinental power projection abilities.

Edwards Air Force Base continued to play a pivotal role in aeronautical breakthroughs throughout the next three decades. The arrival of the North American X-15 rocket-powered aircraft brought success to the base, including the first human flight of an aircraft into space in 1962. During this time, the Air Force Flight Test Center and NASA paired up to explore “lifting reentry” with wingless lifting body aircraft. Their success led to advantages in the Space Shuttle and other designs.

Following the end of the Cold War, Edwards was one of the few bases in the entire Department of Defense to gain more jobs. However, much of the work Edwards AFB performs today is confidential due to security reasons. The base continues to be the center of Air Space exploration and has proven to be a national asset, especially during the War on Terrorism.

The current host wing of the Edwards Air Force Base is the 412th Test Wing. The 412 TW’s origins can be traced back to the beginnings of the Edwards AFB when the unit was activated on the base in 1943. The wing oversees daily operations and provides support for over 10,000 military and federal civilian workers.  412 TW’s main mission is to plan, conduct, analyze, and report on all flight and ground testing of aircraft, weapons systems, software and components as well as modeling and simulation for the Air Force. The unit focuses on three major components - flying operations, maintenance, and engineering.

The Test Pilot School is under the jurisdiction of the 412th Test Wing. The 412 TW trains the Air Force’s top pilots, navigators, and engineers to conduct test flights and generate data. The school has been very prosperous since its founding in 1942. The admission to the school is very selective, as all candidates must receive special clearance and have a wide range of experience. Class sizes are very small and heavily focuses on each individual’s success.

The High Desert Inn has temporary lodging available for when you first arrive at Edwards. Reservations may be made in advance from 24 hours to 120 days before your stay. All rooms have cable TV, coffee makers, and a refrigerator. The official address of the Inn is Edwards, Bldg. 5602 Honts Dr., Edwards AFB, California, 93524. To make reservations and/or to receive information, call (661) 277-3394.

Family housing is privatized at Edwards AFB. Corvias provides on base housing options with many amenities and services.

If you are living on base, your child will attend the following schools on base in the Muroc Joint Unified School District:

If you are not living on base, please contact the School Liaison Office for information regarding your child's local public school district.  The phone number is (661) 277-3846.

Living on Edwards Air Force Base provides you with a variety of options for potential getaways. Nearby small towns, Lancaster and Victorville, have many food and shopping options. Los Angeles is an hour and a half drive, while Las Vegas and San Diego typically take three hours. There are many places to explore!