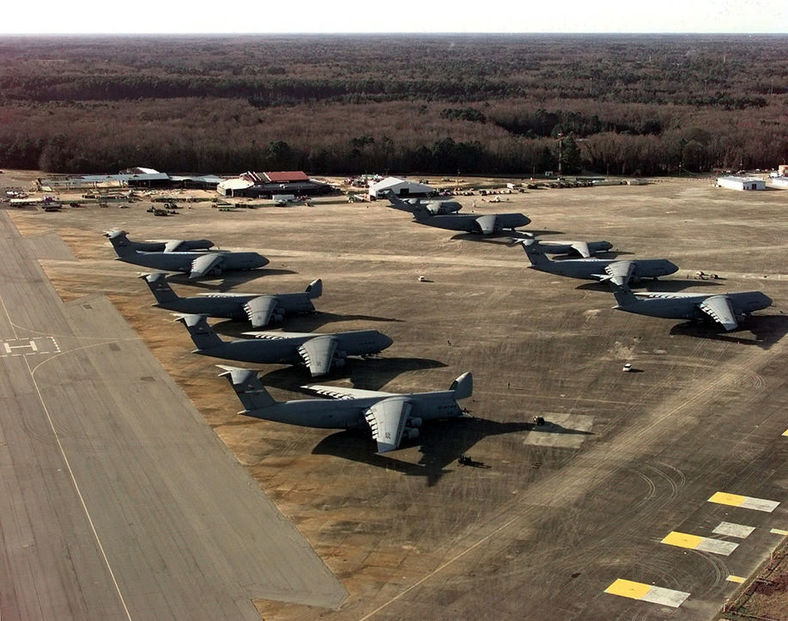 Located in Savannah, Georgia, Hunter Army Airfield is a sub-installation of nearby Fort Stewart. Hunter features an 11,375 foot long runway and parking lot for planes and other aircraft that spans 350 acres. Hunter Army Airfield has also been designated as an alternate landing site for space shuttles by NASA.

Hunter is home to the airborne units belonging to the 3rd Infantry Division as well as the 1st Battalion, 3rd Battalion, 224th Military Intelligence Battalion and the 3rd Combat Aviation Brigade among others. Additionally, the Coast Guard Air Station Savannah is located onsite at Hunter Army Airfield.

Originally named Savannah Airport, 900 acres of land were purchased by the state to construct an airport for civilian use that would later become Hunter Army Airfield. The Air Corps was in need of new air bases all across the country and in the summer of 1940, decided to use Hunter Airfield as the location for light bomber training. During this time, Hunter Airfield still shared its facilities with a civilian airport.

The 1941 bombing of Pearl Harbor changed the way Hunter operated; passes were eliminated and it became necessary for military personnel to wear uniforms around the clock as the United States prepared to go to war. By 1943, Hunter Army Airfield had grown to 3,000 acres.

The Department of Defense publicized their decision to close Hunter in 1964 because the facilities were outdated and could no longer support the military's advancing weapons technology. However, the Vietnam War saved Hunter from closure as the post became a training site for helicopter pilots. The winter of 1966 saw Hunter Army Airfield and Fort Stewart become the homes of the Advanced Flight Training Center. Within five years, Hunter produced 11,000 new rotary wing pilots and 4,328 fixed wing pilots.

Once the Vietnam War ended, Hunter again faced closure; this time, there was no need to keep the base open and the Army closed the installation only to reopen it in 1974, as an extension of Fort Stewart. In early 2003, soldiers from the 3rd Infantry Division were deployed from Hunter and were the first group to enter Baghdad in support of Operation Iraqi Freedom. Hunter Army Airfield has been in service ever since and continues to support the U.S. military's training, deployment and logistical efforts.

There are various hotels nearby including a Courtyard by Marriott, a Best Western and a Hampton Inn & Suites. IHG Army Hotels can also help you find accommodations on post.

Downtown Savannah is less than 15 minutes from Hunter Army Airfield. You'll find restaurants, cafés, parks and more, including a Hop-on Hop-off Trolley Tour and the beautiful Cathedral of St. John the Baptist. There's a historic district with cemetery and walking tours of the city as well.

Hunter Army Airfield MWR offers programs and activities for individuals and families ranging from fitness classes to arts and crafts. The MWR Office can be contacted at (912) 315-3674.