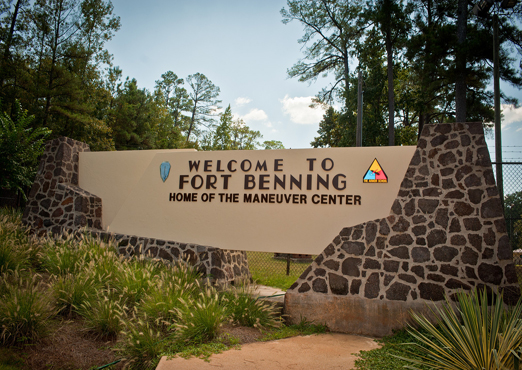 Fort Benning is a United States Army facility in Georgia that sits on 182,000 acres. Situated on the Alabama-Georgia border, Fort Benning is divided into four main sections: the Main Post, Kelley Hill, Sand Hill and Harmony Church and hosts the Maneuver Center of Excellence. The Maneuver Center trains troops to be prepared for various scenarios including mounted and dismounted combat, reconnaissance missions and also provides sniper training.

Fort Benning's Main Post hosts United States Armed Forces Command (FORSCOM) units including the 14th Combat Support Hospital and the 11th Engineer Battalion. The Main Post is also home to the U.S. Army's Officer Candidate School (OCS), the Airborne School and the Non-Commissioned Officers Academy. Kelley Hill used to be the site of the 3rd Armored Brigade Combat Team while Sand Hill sees to the training of the Infantry One Station Unit Training (OSUT) and serves as the main home base of the 198th Infantry Brigade.

Fort Benning is in the top five largest and busiest installations in the country as more than half of all people who decide to serve in the armed forces will receive training here. So many servicemen and women pass through Fort Benning each year because of the 100 classes and training programs available including: Basic Combat Training, Infantry and Armor One Station Unit Training, U.S. Army Ranger School, Airborne School, Sniper School, Pathfinder, Reconnaissance and Surveillance Course School, Combatives School, and Officer Candidate School. Functional classes are also taught. They include an Armor Infantry Basic Officer course, Maneuver Captions Career course and non-commissioned officer training. Fort Benning is also a Power Projection Platform (PPP) meaning that it is able to immediately deploy combat-ready troops by air, rail and highway.

Fort Benning, originally named Camp Benning, was established in 1918 as a temporary basic training camp. In 1920, Congress made it a permanent installation and allocated over $1 million to continue expanding the Infantry School of Arms. By late 1920, more than 8,000 military personnel were living at Camp Benning. In 1922, Camp was dropped from the name and Fort was added. Fort Benning was named after General Henry L. Benning, a Georgia native and Confederate commander.

In 1924, Fort Benning saw a growth in facilities under Brigadier General Briant H. Wells who also served as the Commanding General for the U.S. Army for four years. Wells developed a plan to construct areas on site for soldiers to enjoy recreational activities. Under Wells' direction, Fort Benning saw the addition of Doughboy Stadium (a memorial for fallen WWI soldiers), Gowdy Field, a theatre and a pool.

When Lieutenant Colonel George C. Marshall took over the Assistant Commandant position at Fort Benning in 1927, he implemented changes to the curriculum and the way training methods were taught with the hopes that soldiers who received better preparation would be less likely to perish during war. Marshall felt that more could have been done to prevent so many American deaths during WWI--instead of teaching soldiers to repeat information, he sought to teach them to think on their feet and improvise when necessary. Marshall's efforts came to be known as the Benning Revolution and in 1953, he won the Nobel Peace Prize for The Marshall Plan (formally, the European Recovery Program - ERP), an initiative to help Western Europe rebuild after WWII.

During the Vietnam War, Fort Benning saw to the training of scout dogs and housed a school specifically aimed at teaching dogs how to sense impending ambushes on enemy grounds. The installation was a temporary home for the canines as they were shipped to Vietnam to take advanced courses and complete their training.

Note: If you are trying to reach someone specific, it will depend what company/battalion the recipient is in. You will generally want to address mail as follows:

There is on-post housing at Fort Benning. For information on available homes, floorplans, virtual tours, special offers and more, visit The Villages of Benning or call (706) 685-3939 ext. 600/ext. 213. There are lots of options including apartments and single-family properties at Fort Benning.

Options within 5 miles of Fort Benning include:

Students eligible to attend these DoDEA schools are children or legal dependents of active duty military personnel or current DoD civilian employees. They must also live in permanent housing at Fort Benning. To contact the office of the Fort Benning Community Superintendent, you can call (706) 545-7276.

There are tons of things to do and see near Fort Benning including but not limited to:

Fort Benning's MWR website features everything you need to begin planning your extracurriculars. You'll find contact lists, schedules and calendars, resources and community programs to guide you through the many options available for you and your family.

If you have a specific question you can't find information on, you can email [email protected] for answers.