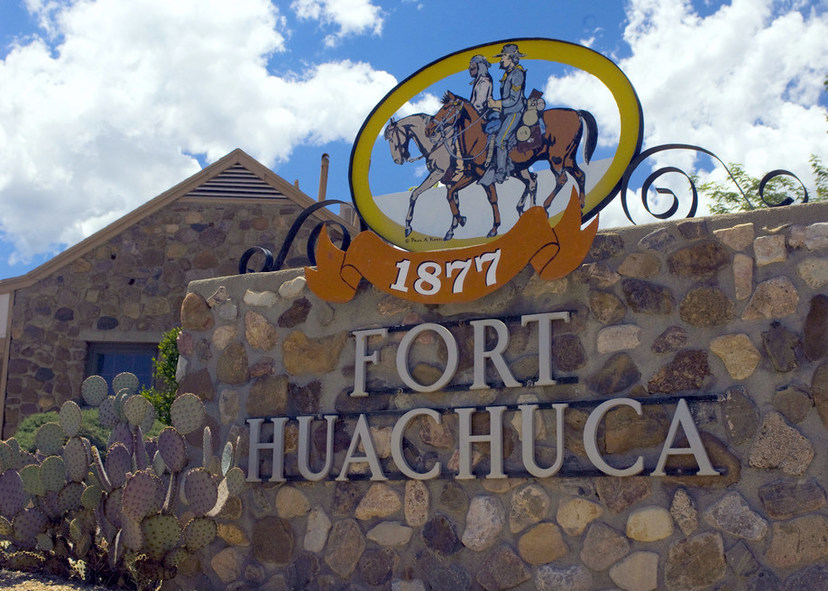 Fort Huachuca is an installation of the United States Army located in the southeastern portion of the state Cochise County, Arizona; about 15 miles north of Mexico. From Tucson, the base is about 75 minutes away via car. The county itself is as large as Rhode Island and Connecticut combined. The base is perhaps best known for its "Buffalo Soldiers" from the 1910's through the early 1930's. The fort typically has as many as 18,000 personnel on base during regular working hours. The base holds two main units: NETCOM (The Network Enterprise Technology Command of the Army) and the US Army Intelligence Center. Also located within the Fort is Libby Army Airfield.

According to the United States Navy, Fort Huachuca's mission is to test systems of surveillance and deliver intelligence to support the Army and joint operations as well as the improvement of Fort Huachuca as a whole.

The weather and climate of this part of Arizona is arid and incredibly dry; rainfall averages are about 18 inches per year. The weather, however, should not be confused with a desert climate. With the changing seasons, the weather also changes accordingly. A Summer day typically hangs in the mid-nineties while a Winter day can sometimes be in the lower twenties.

The Fort was initially created in as a camp 1877 to combat potential threats coming from Mexico. The basic geography was appealing to Calvary’s because of its prevalent hills which could act as natural barriers. Five years later, in 1882 it became Fort Huachuca. Military actions against Apache leader Geronimo were led from Huachuca. In 1913, the base became well known for Buffalo Soldiers, African American regiments who bravely fought for the United States in several wars while simultaneously fighting racism.

During World War II, the base expanded to over 71,000 acres and contained over 25,000 servicemen and women. Interestingly, after the War the post was given to the Arizona Game and Fish Department but returned for military purposes with the start of the Korean War. In 1951, the Air Force took over the Fort for one month in February of that year, and then returned to the Army in March. After the Korean War, the Fort was closed leaving only one building open to care for the over 71,000-acre plot.

In 1954, the Fort was again reactivated and focused on the creation of electronic warfare. The Army Security Agency Testing center began here in 1960. In 1967, the Fort became the headquarters of the U.S. Army Strategic Communications Command. In 1976, the Fort was placed on the National registry of Historic Landmarks. In more recent years, the Fort has been the location of the Military World Games.

The fort has been used in several films and television shows over the years. The 1963 film 'Captain Newman, MD' was filmed at the base and starred Gregory Peck. A dramatic comedy called 'Suppose They Gave a War and Nobody Came' starring Ernest Borgnine and Tony Curtis had scenes filmed on site. Academy-Award Nominated Film 'Clear and Present Danger' starring such actors as Harrison Ford, James Earl Jones, and Willem Defoe depicts the base in certain scenes of the film. A Discovery Channel episode of 'Lone Target' was shot on at the Fort as well.

Lodge booking on base is available through IHG Army Hotels and the average room costs around $70 per night. Some amenities at this location are the breakfasts, high speed internet, laundry services, and fitness areas. This is a non-smoking facility and pets are allowed with a one-time fee $75 and $7 per night.

There are several options outside of IHG Army hotels on Fort Huachuca. Some favorably rated hotels within a 15 minute drive from base are Green Places Suites at $85 a room per night, Gateway Studio Suites at $80 per night, and Holiday Inn Express Sierra Vista at around $89. There is also “down to Earth” Inn nearby, The Roadway Inn, whose rooms rent for $57 a night.

A college located near the base, Cochise College, has dozens of programs available to those desiring to obtain an Associates Degree.

An Arts and Crafts Center is on base which features some activities like painting, photography, embroidery, and features events for church groups and both the Boy and Girl Scouts of America. Child and Youth programs are available for children aged 6-weeks to Kindergarten age from professionally trained staff.

One of the features significant to Fort Huachuca is their outdoor activities specific to the Arizona geography. A Sunset Trail Ride on horses can be utilized at $45 per ride. Also, free outdoor movies are available to personnel during the summer months from 7pm to 10pm.

Fort Huachuca has many events on for its personnel, especially during the weekends. The Calendar, as well as more information is available on their MWR website.

Things to do near Fort Huachuca

Even though the Fort is only 15 miles from Mexico, the military has advised to stay away from the area due to crime and drug trafficking. However, there are things to do without having to travel a very far distance.

Close by, the Buffalo Solider Museum is a nice way to absorb the history that surrounds the base.  Carr Canyon and Carr Peak exist only two miles from base and offer very scenic views of the surrounding area. A Farmers Market is open everything Thursday from 10 a.m. to 2 p.m. as well. For those willing to travel to Tucson, about 75 minutes away by car, Saguaro National Park holds some of the largest cacti in the world and marvelous desert scenery. The Pima Air and Space Museum is a fun spot for the whole family; featuring indoor and outdoor exhibits. For TV and Movie buffs, Old Tucson  is the location of over 400 wild west style film sets which are available for tour as well as a handful of events which occur on the site. Additionally, Reid Park Zoo is a fun spot for animal lovers and those who enjoy nature.