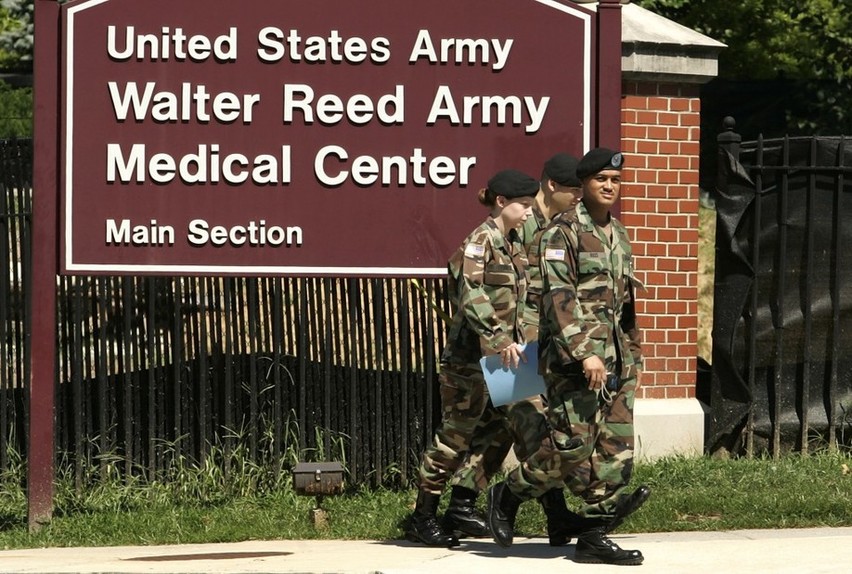 The Walter Reed Army Medical Center (WRAMC), dubbed “The Nation’s Medical Center,” has served active and retired personnel for over a century.  The facility has several origins, from Fort McNair during the 1800s, to its relocation to Georgia Avenue in 1909. In 2011, the WRAMC partnered with the National Naval Medical Center in Bethesda, MD to establish the tri-service Walter Reed National Military Medicine Center. Its mission has remained to offer top-notch care while transforming the teaching and practice of military medicine.

The facility began at Fort McNair (then known as Washington Barracks) in southwest Washington D.C., a location established by George Washington as a military reservation. Its strategic placement between the Anacostia and Potomac Rivers made the site an ideal military location. Walter Reed reportedly worked in the Hospital at Washington Barracks as a Camp Surgeon from 1881-1882 and at the Army Medical Museum as Professor of Medicine and Curator. Reed died in 1902 from appendicitis complications, and the hospital to be built was later named after him.

Congress approved the relocation of the hospital in May 1909. In 1923, General John J. Pershing signed in support of the creating the “Army Medical Center” (AMC) within Walter Reed’s campus. In addition, the Army Medical School was also moved to the WRAMC. The Walter Reed Army Institute of Research was established in 1955, and in 1964, Walter Reed Army Institute of Nursing was introduced to the facility. Recently in 2007, the University of Pennsylvania and WRAMC combined to produce the Perelman Center for Advanced Medicine’s Roberts Proton Therapy Center.

Also in 2007, however, a neglect scandal was published and investigated by The Washington Post regarding alleged neglect at WRAMC. This report unfortunately forced the resignation of several officers at the site.

Walter Reed Medical Center’s closure in 2011 was due to a 2005 BRAC recommendation. The cost of closing and re-consolidating the hospital skyrocketed to $2.6 billion since the initiative was first proposed. While the center has moved to different grounds, its former Georgia Avenue location is listed on the National Register of Historic Places as of 2015.

The facility is accessible by both car and metro. View driving directions.

Or, if you have a GPS, simply plug in the address:

The America Garage is designated for patient parking.  Click here for a base map.