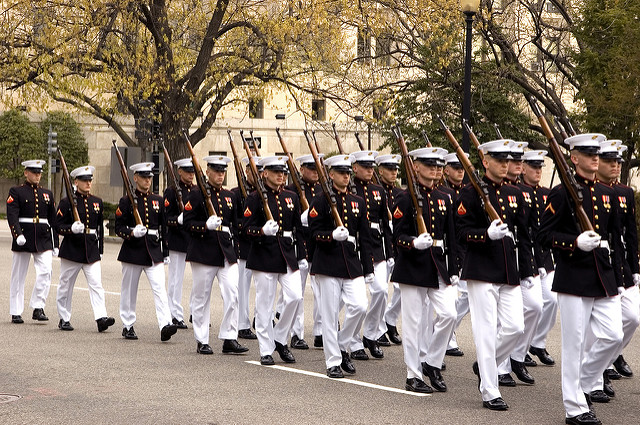 The Marine Barracks are located in Washington D.C. on the corner of 8th and I street. The Barracks in D.C., sometimes called the 8th and I, houses the Commandant of the Marine Corps, U.S. Marine Band, and the Drum and Bugle Corps. This barracks are the Corp’s main ceremonial grounds and are responsible for ceremonial missions around the United States and in foreign countries. Other responsibilities of the Barracks include, overseeing the training and education programs of the Marine Corps and providing security to locations in Washington D.C., when required.

Since the 8th and I oversee ceremonial missions and parades the Marines stationed there must meet firm height and weight requirements. The marines at 8th and I perform in a sunset parade in the Marine Corps Memorial in Rosslyn, Virginia every Tuesday, during the summer months. They also perform an evening parade in the Barracks every Friday from early spring to the end of summer.

History of the Marine Barracks

The Marine Barracks in D.C. were built in 1801, making it the oldest post of the Marine Corps, and has some of the oldest buildings in Washington D.C. President Thomas Jefferson and William Ward Burrows, the second Commandant of the Marine Corps, hired George Hadfield to design the Barracks and oversaw their construction. During the War of 1812, the British captured Washington D.C. and began to burn most of the city down in what is known as the Burning of Washington. It is rumored, however, that the British held so much respect for the Marines fighting from the Barracks, that it was not burned down.

Since the War of 1812 the 8th and I have been a ceremonial barracks, housing the Commandant and Marine Bands. It is one of the oldest building in Washington. Therefore, in 1972 the Barracks was placed on the National Register of Historic Places. The Department of Interior named the Marine Barracks in Washington a National Historic Landmark in 1976.

Training at the Marine Barracks

Training at the Marine Barracks differs from other bases. Marines stationed at the Barracks must train for ceremonial processions and military operations. For military training, the Marines get field training, civil disturbance training, rifle and pistol qualifications, gas chamber training and Essential Subjects Training.

For ceremonial training, the Marines receive intensive training as soon as they arrive on the base. Additionally, all incoming officers and non-commissioned officers are required to have attended Ceremonial Drill School. This training prepares incoming marines for the summertime parades that the 8th and I performs. Because of these summer times parades, training in the summer is reduced to Wednesdays and Thursdays.

The Marine Barracks offers several services for the Marines stationed there. The barracks have a Family Readiness Center, the Semper Fit Program, a Barber Shop, and a Single Marines Program.  These programs help Marines adjust to life on the barracks and to get involved in the Washington D.C. community.

As the nation’s capital, the D.C. area has many historical and cultural landmarks to visit and explore. Among D.C.’s political and historical landmarks are the White House, the Capital Building, the National Mall (houses the Lincoln Memorial, the Korean War Memorial and the Vietnam Memorial) and the Washington Monument.  For dinning and shopping activities, Georgetown, a neighborhood in D.C., has a shopping hub housing local stores and designer shops. Downtown D.C. also houses a variety of boutiques and shops to explore.