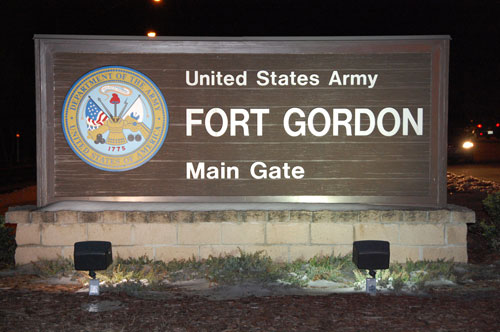 Fort Gordon is the home of Army Cyber warfare and operates the Army Cyber Center of Excellence. Fort Gordon is a base that not too many people are familiar with, but it’s been around for a long time. It was first founded in 1917. Back then it was known as Camp Gordon.

Ft. Gordon has been the primary base for Signal training. That is, until it was selected to operate the U.S. Army Cyber Center of Excellence. Now Fort Gordon is on the cutting edge of military technology and trains elite soldiers for Cyber warfare.

Signal Advanced Individual Training is still a large part of the mission of Fort Gordon. But as the Army focuses on growing its cyber warfare capability and looks to the technological advancement of warfare Fort Gordon is becoming the key training center for soldiers that are learning how to master today’s technology as is applies to warfare.

The installation has about 30,000 military and civilian employees at any given time and is projected to grow rapidly over the next five years. By 2019 the completion of additional training centers and the expansion of the Fort’s mission to include Cyber warfare and Cyber Security is expected to add more than 4,000 jobs to the area. Fort Gordon is growing fast and that is ushering in a lot of exciting changes to the area.

Fort Gordon occupies more than 55,000 acres although most of the base’s activities are centered in one location. Nature lovers will love Fort Gordon because there are many areas of the base that encompass protected wildlife preserves.

Outdoor activities like hiking, hunting, fishing, bicycling, and horseback riding are all available right on base. If you live in on base housing it’s not at all unusual to have to stop and wait for geese and ducks and sometimes deer to cross the road.

Ft. Gordon uses the Automated Installation Entry system. If it’s your first time on base you should enter through Gate 1 get in the lane for visitors. From there you can stop at the Visitor’s Center and get set up to use the Automated Installation Entry system. As long as you have a military ID or dependent ID the process is quick and easy. Once your ID is registered you will be able to swipe your ID card at the gate to get on base.

Fort Gordon is located just on the edge of Augusta, GA. It’s very close to the border between Georgia and South Carolina. Technically Augusta is part of a group of 13 counties in both Georgia and South Carolina that are locally called the CSRA: the Central Savannah River Area. That’s because the Savannah River acts as the border between the two states.

You’ll hear and see the CSRA referred to often when you’re at Fort Gordon. There is a lot of movement back and forth between the cities that makeup the CSRA like Augusta and Aiken, SC. The entire CSRA region has over a half of a million residents.

Within a two hour drive from the base are the major destinations in both Georgia and South Carolina like Savannah, GA and Atlanta, GA. Columbia, SC is just about an hour away and beautiful Charleston, SC is just about two hours away. At Fort Gordon you’re never more than a couple hours from the best that the South has to offer.

If you like hot weather you will love Fort Gordon. The weather is typically nice throughout the year, although it can get cold during January and February. Summers are hot and humid with temperatures usually in the high 90s with a heat index in the triple digits.  January and February are the coldest months and the temperatures can dip down into the 40s or high 30s. But freezing temps or snow are unusual for this area.

Advanced Individual Training soldiers and other incoming soldiers usually fly into Atlanta. From there you can rent a car to get to Ft. Gordon or Groome Shuttle offers shuttle service to and from the base. The cost of the shuttle is about $40 and shuttles run very frequently so most soldiers choose to take the shuttle to get here.

Recently the PX got a 36 million dollar upgrade and most of the shops and conveniences that were scattered around the base are now all in the main PX. Clothing and Sales, the Class 6, laundry facilities are more are now in a central location so that you can do everything you need to do in one location.

In processing is primarily done in one place, Darling Hall, so that is quick and convenient too. When it comes to enjoying a little down time on post there is an entertainment complex that has a sports bar, restaurant and bowling alley on post. There is also a BINGO facility. And soldiers in the barracks can play video games, get coffee, have some pizza and snacks and just hang out at Alternate Escapes which is located next to the Dominos pizza restaurant on post.

Because Fort Gordon is the home of both Signal and Cyber you can expect to find a lot of gamers, geeks, and technology aficionados at Fort Gordon. There are gaming shops, comic shops, local gaming leagues and more here.

If you are PCSing to Fort Gordon with your family you will find that there is a lot to do for families at Fort Gordon too. On post schools are pretty good, and there are plenty of great schools off base as well. Dwight D. Eisenhower Army Medical Center is on post and offers great medical care to soldiers and families. DDEAMC is one of the highest rated medical facilities in the area.

On Base And Off Base Housing

It’s What You Make It