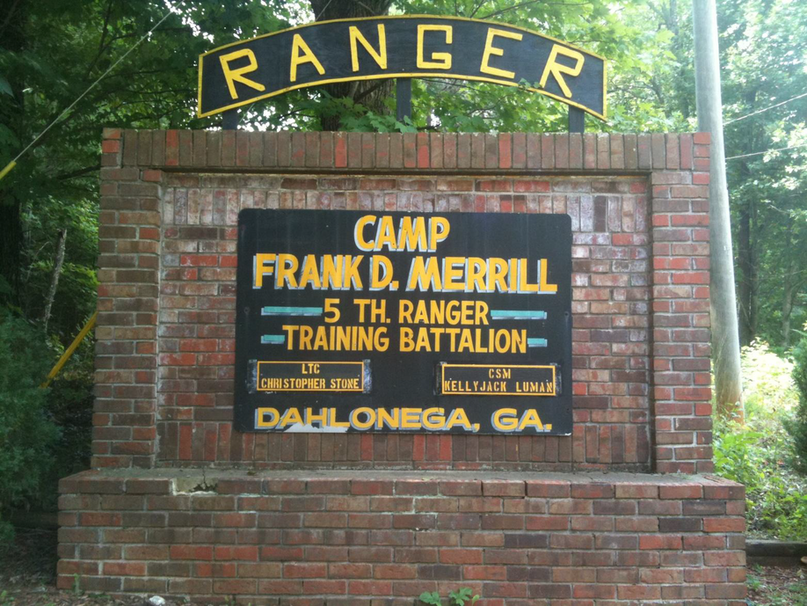 The base is about 75 miles north of Atlanta, Georgia. The Hartsfield–Jackson Atlanta International Airport, one is the busiest airports in the nation, may be used to connect military members to the base.

The climate in northern Georgia is warm. Winters are mild, with highs usually around 50° F. The summers are hot and humid, with highs reaching up to 90° F. Keep in mind that temperatures are cooler in higher elevations, such as Camp Frank D. Merrill.

The camp is located at 1 Camp Merrill, Dahlonega, Georgia 30533.

In 1960, construction of the "Mountain Ranger Camp" began. The camp was built with five barracks, a operations center, an infirmary, quarters, a recreation building, and other miscellaneous buildings.  Originally, the students were only permitted on base during the summer and stayed in tents. Lodging was soon built on base, allowing students to stay warm during the winter.

During the Vietnam War, use of the camp increased. For some troops, the base was the last training stop before entering the war. Around this time, the camp was renamed to "Camp Frank D. Merrill".

Frank D. Merrill was a well-known U.S. army general during the 20th century. Merrill commanded the "Merrill's Marauders", a jungle warfare unit that fought in southeast Asia during World War II. Merrill received many awards and decorations, including a Distinguished Service Medal, Purple Heart, and Bronze Star Medal. A 1962 film, titled "Merrill's Marauders", was based off Merrill's missions in the jungle.

Renovations were conducted in the 1980s to advance the base. A new student lodging building, gymnasium, and track were built. Later in the decade, 40 single family homes were built in the Dahlonega area for troops stationed at Camp Frank D. Merrill.

In 2015, the camp gained an additional 282 acres from the U.S. Forest Service. The base had previously leased the land, as it was needed to execute the training exercises. The Army continues to train throughout the North Georgia Mountains.

The 5th Ranger Training Battalion continues to be stationed at Camp Frank D. Merrill. The main mission of the unit is to conduct the mountain phase of Ranger School and to produce rangers with the ability to destroy the enemy in direct fire battle.

"The Mountain Phase" is the second of three ranger training phases. The phase is designed to enhance the troops' ability to plan and perform combat missions in mountainous terrain. This phase covers mountaineering, small unit tactics, patrol infiltration, raids, ambushes, and other skills.

Lodging / Things to Do (MWR)

On base temporary lodging is provided by the Overhang Club. Direct TV and free wifi are provided. Each cottage has two bedrooms and a kitchen. The cottages cost $75 for the first night and $50 each night after. For more information and/or to reserve a room, call (706) 864-3327.

Hotels are available in nearby Dahlonega. Highly rated affordable recommendations include the Park Palace Hotel and Holiday Inn Express.

Camp Frank D. Merrill offers many forms of entertainment on base and nearby. The base has many amenities, including a dining hall, mail room, gymnasium, and weight lifting room.  Military members have access to the local pool in Dahlonega.