Joint Base McGuire–Dix–Lakehurst in Trenton, NJ 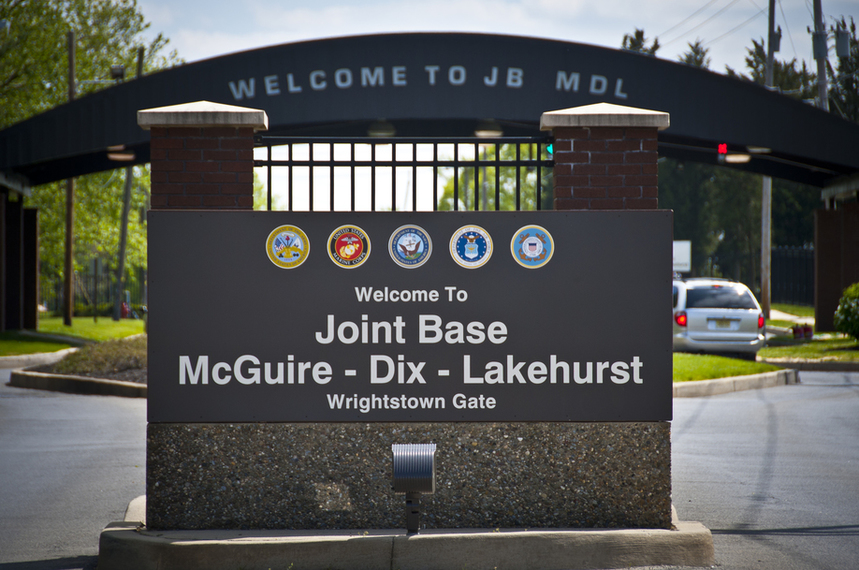 McGuire–Dix–Lakehurst is home to more than 44,000 service men and women and their families. The base spans two counties, Burlington and Ocean, and eight smaller municipalities.  JB MDL works with over 60 mission partners from all 5 branches of the Armed Services.

Joint Base McGuire–Dix–Lakehurst was established by the 2005 Base Realignment and Closure (BRAC) Commission. The 2005 BRAC created 12 Joint Bases, one of which was McGuire–Dix–Lakehurst. The facility is an consolidation of McGuire Air Force Base, Fort Dix (Army), and Naval Air Engineering Station Lakehurst in New Jersey. The separate bases were officially merged on October 1, 2009.

JB MDL is considered primarily an Air Force base even though it was formed as a combination of Air Force, Army, and Navy bases.

McGuire Air Force Base was first opened in 1948, following World War II. The base was originally called Fort Dix Airport. The base closed down briefly during WWII and when it reopened was renamed after Major Thomas Buchanan McGuire, Jr., a fighter pilot and Medal of Honor recipient during WWII. McGuire died in action on January 7, 1945 when his plane crashed in the Philippians.

Camp Dix began construction in 1917 and was first used as a training and staging area for soldiers before WWI. After the first World War, Camp Dix was used as a demobilization center. The base was renamed Fort Dix Army Base on March 8, 1939 when the Army acquired the facility. Fort Dix is named after Major General John Adams Dix, veteran of the War of 1812 and the Civil War.

NAS Lakehurst was the Navy's base of operations for ridged and non-ridged airships. Non-ridged airships are more widely known as blimps. Lakehurst is best known as the location of the Hindenburg disaster. On May 6, 1937 a German passenger blimp caught fire while attempting to dock at NAS Lakehurst. 35 of the 97 people on board died. One person on the ground also died bringing the total fatalities to 36 people.

As a result of massive base consolidations in 2009, Joint Base McGuire–Dix–Lakehurst is home to a wide variety organizations across all five branches of the Armed Services. JB MDL host organization is 87th Air Base Wing. Other units stationed here include:

By consolidating three bases into JB MDL, the bases are able to increase efficiency and realize extensive cost savings. The single base is able to negotiate contracts more effectively because of economies of scale. Additionally the joint base can share resources across military branches. For instance, mission partners on McGuire and Lakehurst utilize live-fire training ranges on Dix, eliminating the need for separate ranges.

If you are just visiting JB MDL there are several great hotel options available. The All American Inn is everyone's first choice when visiting JB MDL. The hotel is located on post.

Do you have a PCS to Join Base McGuire–Dix–Lakehurst? For families and services members staying long-term, there is excellent housing available on and off post. The McGuire/Dix side of base is services by United Communities and the Lakehurst side is services by the Balfour Beatty Communities.

The base works closely with community organizations including the the New Jersey Youth Challenge Academy; is situated near excellent schools; and is close to beaches (the base is located partially within Ocean County, NJ).

There are no DoD schools on Joint Base McGuire–Dix–Lakehurst. Rather, children living on base or in the surrounding area will attend school in one of five school districts:

New students living on base can choose any of these schools to attend. Buses run from the base to each school. Please contact the appropriate school district or School Liaison Office directly at (609) 754-3154.

If you are arriving at Joint Base McGuire–Dix–Lakehurst for the first time you must stop at one of the three visitor centers for a short or long-term visitor's pass.

Moral Welfare and Recreation is a huge part of life on many military base. Joint Base McGuire–Dix–Lakehurst offers top-notch facilities for military personnel and families living on post.