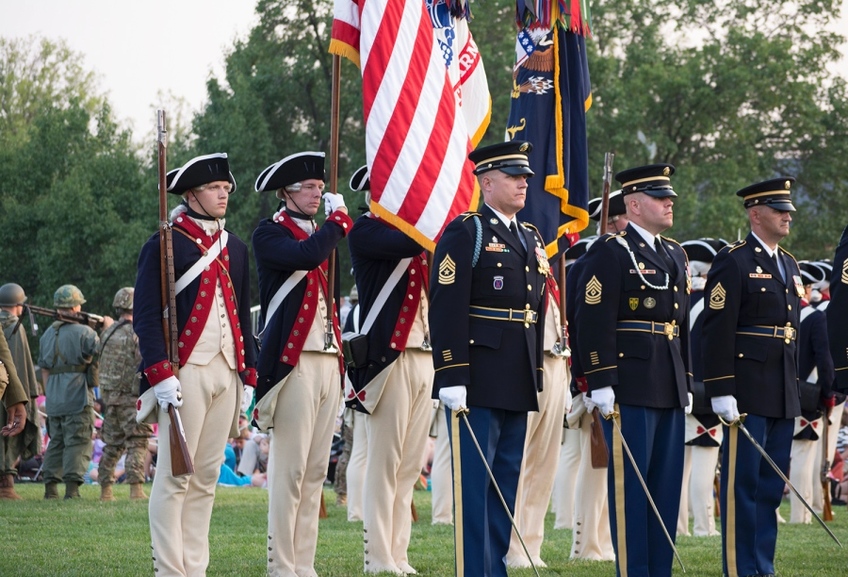 Fort Myer began as a military post during the Civil War and was owned by George and Martha Washington's descendants during the 1800's before the land was overtaken by the government when Martha Washington's great granddaughter was not able to pay the property taxes on the 256 acres of land. Fort Myer, previously known as Fort Whipple, acted as a Union fortification. In 1881, Fort Whipple was renamed to Fort Myer to honor the late Brigadier General Albert J. Myer who had command of the base at the time.

In 1908, Fort Myer was the site of the first successful military test flight conducted by Orville Wright. Unfortunately, a second flight attempt ended with a crash and the death of Wright's passenger, Lieutenant Thomas Selfridge. During WWII, Fort Myer was home to defensive troops and processed military personnel who were both beginning and finishing their service.

Fort McNair is one of the oldest Army installations in the country just behind West Point in New York and the Carlisle Barracks in Pennsylvania. Established in 1791, Fort McNair used to be called Greenleaf Point and housed an arsenal before it was destroyed in an explosion. Between 1898 and 1909 there was a general hospital at Fort McNair that would later become the Walter Reed Army Medical Center. Fort McNair was named after the commander of the U.S. Army ground forces during WWII, Lieutenant General Lesley J. McNair.

Henderson Hall was named after Colonel (Brevet* Brigadier General) Archibald Henderson who had a long and successful military career; Henderson holds the record for serving as Commandant of the Marine Corps for over 38 years--a feat no other officer has managed to achieve. Henderson Hall is situated along the Potomac River directly across from the U.S. Capital and a mere five minutes away from The Pentagon.

*Brevet indicates a promotion to a higher rank for outstanding service.

The following hotels are all within 3 miles of Joint Base Myer-Henderson Hall:

Places of Interest, Things To Do & See

The Arlington National Cemetery was established in 1864 and holds 400,000 graves including those of John F. Kennedy, Jacqueline Kennedy Onassis, John Glenn and Glenn Miller.

The Tomb of the Unknowns is a memorial for American soldiers whose remains were never identified.

The Mount Vernon Trail is a 17 mile long path between the city of Rosslyn and George Washington's Mount Vernon home.

JBMHH's MWR website offers tons of information on upcoming events, schedules and links to follow JBMHH on social media, dining menus, help with accessing conference facilities and the community activity center plus so much more.

If you prefer to speak with someone or have a specific question you can't find an answer to online, feel free to call the JBMHH MWR office at (703) 696-3305.