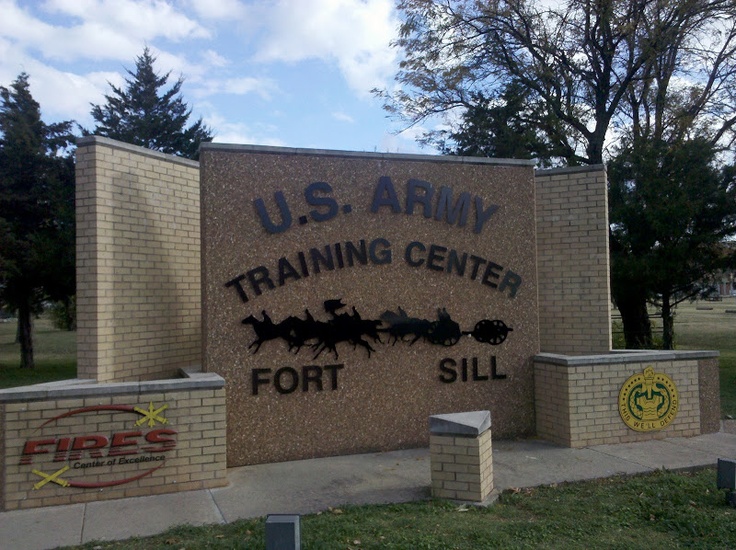 Fort Sill was first occupied in 1868 by Maj. Gen. Sheridan during a winter campaign against the Indians. Fort Sill was originally named Camp Wichita. The base was established near the Medicine Bluffs, a religious and cultural attraction for many tribes. At the time, Gen. Sheridan wanted to force the Indians onto reservations in Indian Territory (modern day Oklahoma). The units that originally occupied Camp Wichita included: 7th Cavalry (under the command of Brig. Gen. George Custer), 19th Kansas Volunteers, and the 10th Cavalry (unit of African-Americans who would later become known as the famous “buffalo soldiers”).

Maj. Gen. Phillip Sheridan, commander of the Military Department of Missouri, named Fort Sill after Brig. Gen. Joshua Sill, his West Point classmate that was killed at the battle of Stones River, Tennessee, in 1862.

At the end of the frontier, in the 1890s, there was talk of eliminating the post and giving the land to the Chiricahua Apache.

By 1905, many of the cavalry regiments had left Fort Sill and were replaced with field artillery units. The field artillery units required additional facilities, which led to a western and southern expansion of Fort Sill. This expansion led to Fort Sill becoming the home for the School of Fires in 1911 (later becoming the Field Artillery School), the Infantry School in 1913, and the first aircraft in 1915. During World War I, more than 50,000 soldiers trained at Fort Sill, and in 1917 the Army Air Service constructed Post Field as home for army aviation. The Infantry School would later move to Fort Benning, GA in 1918.

World War II saw another large expansion for Fort Sill. In 1930 Fort Sill became the permanent home of the Field Artillery branch. The post added thousands of courses and new students as the post continued to expand. In 1945, the U.S. Army Aviation School was added to Fort Sill.

During the 1950s Fort Sill would lose the Aviation School to Fort Rucker, Alabama but that did not prevent the post from further expansion. The artillery mission continued to expand, especially as the Korean War picked up. Fort Sill acquired the responsibility for army missile and atomic warhead training. As part of that training, soldiers from Fort Sill fired a live 280-millimeter atomic round at Frenchman’s Flat, Nevada, in 1953. This was the only time a live atomic artillery shell has ever been tested.

There are two elementery schools on Fort Sill. Geronimo Road Elementary School for pre-kindergarten through 5th grade. Geronimo has 600+ students and is located at 5727 Geronimo Road, Fort Sill, OK 73503.

IHG Army Hotels Comanche House Historia: Within minutes of the Fort Sill National Historic Landmark and Museum, where you can watch performances and learn the area's rich history rooted in the times of the Indian Wars and Geronimo.

Fort Sill offers plenty to keep you entertained including the Fort Sill Golf Course, the Fort Sill Museum filled with artifacts, insignia, flags and more. Enjoy the nearby restaurants, the movie theater and a bowling alley.

Those looking for fresh air can visit Lake Elmer Thomas Recreation Area for boating, swimming, camping and outdoor fun. If you are not an outdoor enthusiast, Lawton's Central Mall and Cache Road Square are packed with unique shops sure to please even the most experienced shopper.