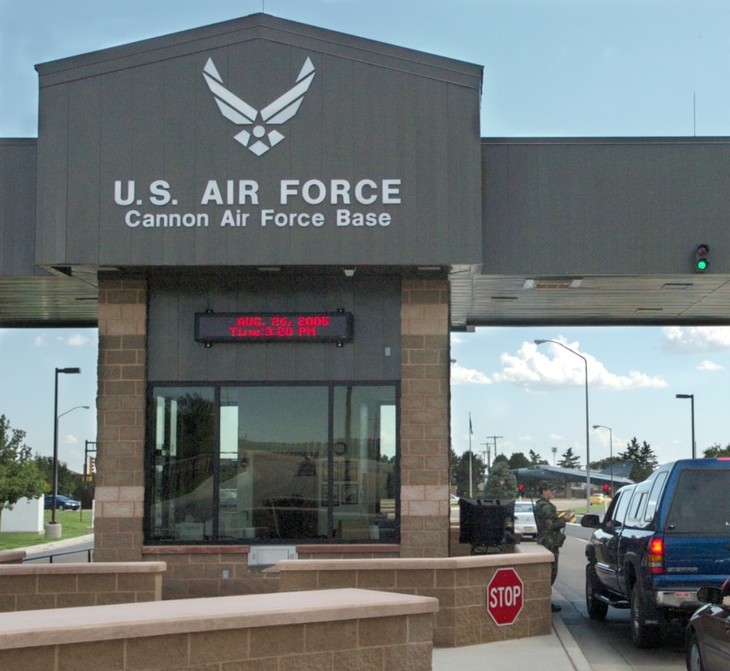 The Cannon Air Force Base is located in Curry County, New Mexico. The base houses the 27th Special Operations Wing which is known for its use of sophisticated tactics and advanced aircraft to aid fellow Special Operations Wings.  The largest commercial airport is Albuquerque International Sunport about 226 miles from the base. A closer option is the Lubboock Preston Smith International Airport, which is located 114 miles from the base.

The Cannon Air Force Base is named after General John K. Cannon. General Cannon was an air force commander in World War II. He eventually became the commander and chief of the United States Air Forces in Europe. The history of the base reaches back to the 1920s when it was a civilian passenger facility named Portair Field. Portair Field became a military base in the early 1940’s when the United States entered World War II. During the second world war, the base was named the Clovis Army Air Field and housed the 16th Bombardment Wing. Shortly after the war, the base was put on a temporary inactive status.

Cannon AFB was reactivated in December of 1947 when the 509th Airdrome group took over operations at the base. Although, the base was quickly placed on reserve in 1948. In the 1950's, the base housed the 140th Fighter-Bomber Wing after they returned from the Korean War.

Cannon Air Force Base provides dormitory-style housing for unaccompanied airmen. Family housing is privatized at Cannon Airforce base. Pets are allowed but must be current on all their shots and there are no veterinary services on the base. For information on unaccompanied housing contact 575-784-6150 or visit  www.housing.af.mil/cannon/unaccompanied. For information on military family housing, please contact Cannon Family Homes at 575-784-7141 or visit their website www.cannonfamilyhomes.com. For general information on housing and moving options contact the base’s Housing Management Office at 575-714-4081.

The Cannon Air base offers a variety of services to help its airmen and their families. These services include an Airman and Family Readiness Center, a Child Development Center, an Exceptional Family Member Program, a School Liaison, and Youth Programs. These programs are designed to make day care and family resources available and easily accessible the airmen and their families.

Clovis, New Mexico offers several activities for residents to enjoy. The attractions include The Hillcrest Park Zoo, the Norman and Vi Petty Rock and Roll Museum, North Palins Mall, and the Main Street Crafters Mall.  Another attraction is the Norman Petty Studios, which offer tours of the iconic musician’s studio.