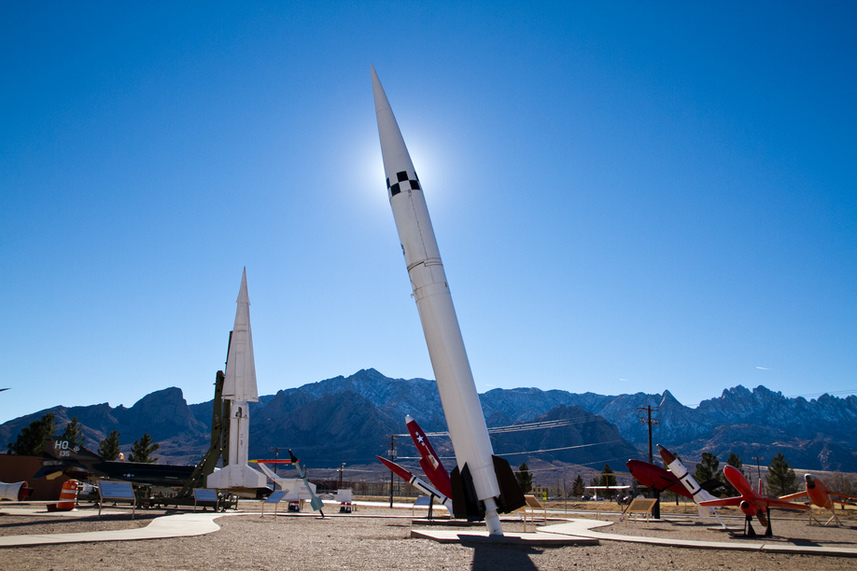 WSMR borders the Holloman Air Force Base and is surrounded by multiple small cities, including Las Cruces, Alamogordo, and "Truth or Consequences" (known for its unique name). El Paso, Texas and the Mexican border are less than an hour away. The El Paso International Airport, 43 miles south, provides convenient transportation. However, there are few direct flights from the East Coast to El Paso - layovers are frequent.

If you like the sunshine, southern New Mexico is for you.  Being in an arid climate, the WSMR base is known for its long, sunny days.  Winters are typically dry and mild. Summers are hot with little humidity. Precipitation rates are rather low, averaging around 10 inches a year. The average high in the summer is in the low 90s, while it's in the high 50s during the winter.

The base is named after the White Sands desert that is located on site. Unlike the typical desert that is composed of quartz, the White Sands desert is known for being made of gypsum and calcium sulfate. This allows the desert sand to look like snow and feel cold to touch. The desert is protected by the state of New Mexico as a National Monument, frequently attracting tourists to see the desert and its originality.

Since the base is so large, there is no official address. WSMR is recognized by the government as a census-designated place. As of the 2010 census, the population of the area is over 1,600 people, including 355 families.  The zip code is 88002.

During the beginnings of World War II, the United States (with the support of the U.K. and Canada) began a research and development program to produce the world's first nuclear bomb. The program, titled the "Manhattan Project".   was obviously successful. The U.S. dropped the first nuclear bomb on July 16, 1945, at the current site of WSMR. It was then known as the "Trinity" site.

The grounds were soon annexed by the Secretary of War in order to create a new base. Construction of the "White Sands Test Facility" was finished by 1946. The installation soon became known for the first successful launch of a rocket (the V-2 rocket) on American soil.

The base continued to progress through the 1950s and 1960s. Missile programs, such as the Nike series, PGM-11 Redstone, and MGM-29 Sergeant, were developed and tested by WSMR forces. NASA also utilized the base for testing and research purposes during the Apollo program.

On March 30, 1982, the Space Shuttle Columbia landed on the WSMR base. Columbia was the first space-rated orbiter in NASA's Space Shuttle program. The landed ended the test flight in the Columbia series and demonstrated to NASA that the shuttle could land under a variety of conditions.

Today, the White Sands Missile Range focuses on providing the Army, Navy, Air Force, and Department of Defense with high-quality services for experimentation, test, research, assessment, development, and training in support of defense efforts. As of summer 2017, the 3rd Battalion, 6th Air Defense Artillery, and the Patriot Test Detachment are set to be activated on base by Fall 2018.

When first arriving at White Sands Missile Range, temporary lodging is available. The InterContinetal Hotel Group Army Hotel is located on base with over 60 rooms. Amenities include daily complimentary breakfast, social events, shuttle services, free laundry facilities, and pet-friendly rooms. For more information and/or to reserve a room, call (575) 288-3220 or visit the hotel website.

At WSMR, family housing is on-site and privatized. The Balfour Beatty Communities offers homes at the "White Sands Homes" facility. The neighborhood offers a dog park, playgrounds, and a jogging trail. For more information, call (575) 674-2463 or visit the White Sands Homes website.

Schools Children living on base will attend schools in the Las Cruces Public School District. The White Sands School, located on the base, serves students in Kindergarten through 8th grade. For more information, contact the School Liason office at (575) 678-7093.

There are many fun activities for people of all ages at WSMR. On base services include multiple bars and restaurants, a fitness center, an aquatic center, youth center, an Arts and Crafts center, and more. Be sure to visit the official White Sands Missle Range Family and MWR website.

Every year, WSMR hosts the Bataan Memorial Death March. The March is hosted in honor of American soldiers, captured by Japanese forces, who were forced to march as prisoners-of-war through horrid conditions during World War 2. The courses are quite difficult and truly test the participants.