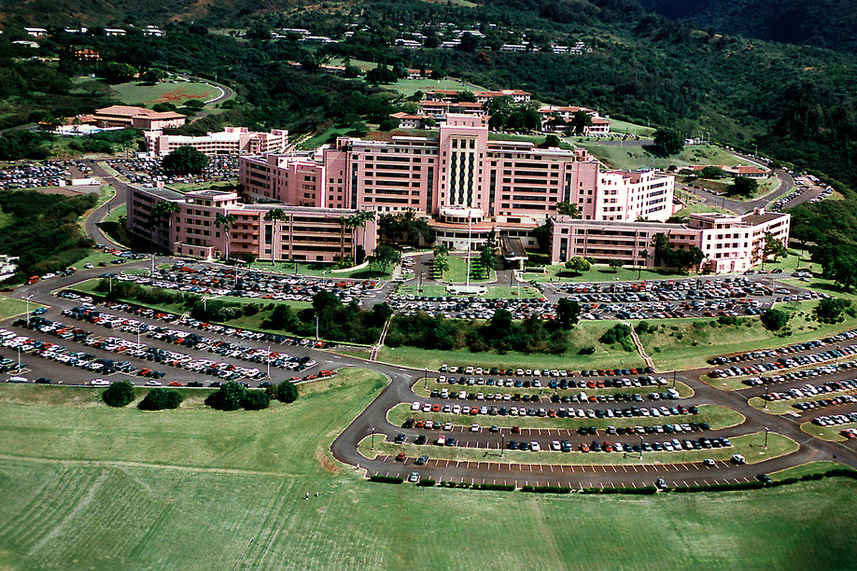 The site provides not only functionality, but also beautiful views of the surrounding Hawaiian Oasis. Whether you are staying at the hospital to be treated, on site as an employee, or in the area visiting, Tripler Army Medical Center and its surroundings have plenty to offer.

The Medical Center was established in 1907, but was not as lavish originally. At the time, it utilized simple wooden structures at Fort Shafer on Honolulu to use for servicing wounded soldiers. In 1920, Tripler split into its own base and was named after famous civil war medic Brigadier General Charles Stuart Tripler. It was not until a military governor of Hawaii during World War II named Lieutenant General Robert C. Richardson, Jr. became commissioner that the site realized its full potential.

At first glance, the facility looks less like a hospital and more like a resort—its coral pink color and massive span makes the friendly facility difficult to miss on the island. This is because when the architect designed it in 1948, right after World War II, he wanted the site to be as accessible as possible for soldiers seeking an emotional and physical solace.

While the Tripler Army Medical Center has changed its appearance, its philosophy has stayed the same: the delivery of safe and high-quality healthcare for service members, their families, and eligible beneficiaries should be made both as efficient and comfortable as possible. This mission has been successfully carried out by the center for over a century.

Though the facility does a fantastic job of taking care of individual patients, it doesn’t stop there.  Tripler Army Medical Center also has an overarching humanitarian purpose, as it works with the United Nations (UN) as a Peace Operations Institute, the only of its kind in the United States.  Its partnership with the organization signifies its ability to serve not just troops in the U.S., but also those of countries belonging to the UN.

For patient services, there is a visitor control center able to answer questions regarding transportation options upon arrival, such as parking, valet parking, and shuttles. Please contact (808) 433-6661 for more information.

There is also an emergency room for urgent medical attention, a treasurer’s office for discharge and payment, and a mail distribution center.

The CAS allows a patient to simply dial one number to make appointments with more than one clinic (Tripler and Schofield Barracks). To make an appointment dial (808) 433-2778, and to cancel dial the same number but choose option #2. To avoid the phone call hassle, you can go to www.tricareonline.com.

There are no DoD schools in Hawaii.  Instead, students can attend public or charter schools run by the Hawaii Department of education based on location of residence (Tripler is considered part of Aeia-Moanaliua-Radford Complex Area, also known as Central District). There are additional complexes/districts near Tripler, including the Leeward District and Windward District.

Recreation opportunities at Tripler Army Medical Center are Abundant.  Though not government-owned, the Hale Koa Hotel is a great option for recreation, but you may also choose to join in on the fun at

For active duty or retired military, IHG hotels have great options for temporary stay, at both Tripler and Fort Shafer DVQ. Contact (877) 711-8326 for more information.