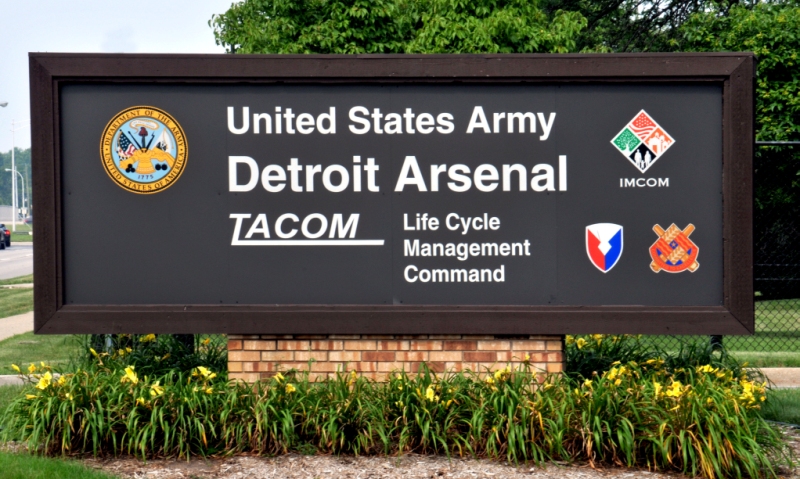 The Detroit Arsenal used to be the Detroit Arsenal Tank Plant (DATP) before being renamed in 1967. It was the country's first plant built specifically for mass producing combat tanks. Chrysler was responsible for construction and worked nonstop to finish the plant as soon as possible. However, even with Chrysler's accelerated efforts, the first tanks the Arsenal built were rolled out before the actual building construction was complete.

Impressively, the Detroit Arsenal was responsible for the assembly of one fourth of the 89,568 tanks that came out of the United States during World War II. Chrysler had command over the production operations at the Arsenal until 1982 when it sold its defense division to General Dynamics Land Systems--the producers of the M1 Abrams tank.

In 1996, the manufacturing plant was shut down and pieces of the property was sold to the Detroit suburb of Warren. Currently, the remainder of the property is managed by Installation Management Command (IMCOM) and serves as the headquarters of the United States Army Tank Automotive Research, Development and Engineering Center (TARDEC).

The Detroit Arsenal TACOM experienced a large jump in growth rates in 2010 and continues to grow steadily.  TACOM is responsible for creating almost 65% of the equipment used by Army combat teams. The current Commanding General at the Detroit Arsenal is Major General Clark W. LeMasters, Jr. He succeeds the first woman to serve in this role at the Arsenal, Major General Gwen Bingham.

Additionally, there is no single service member housing at the Detroit Arsenal. Instead, Service members should contact the HSO before finalizing any permanent living arrangements.

There are no schools on post. The Detroit Arsenal School Support Services is a good place to start researching your family's schooling options. Support Services can be reached at (586) 282-4537.

The  School Liaison Officer is also available to assist with any school-related questions and concerns you may have. They can be reached at (586) 282-9761. Office hours are M-F from 6a-5:30p; the office is closed on weekends.