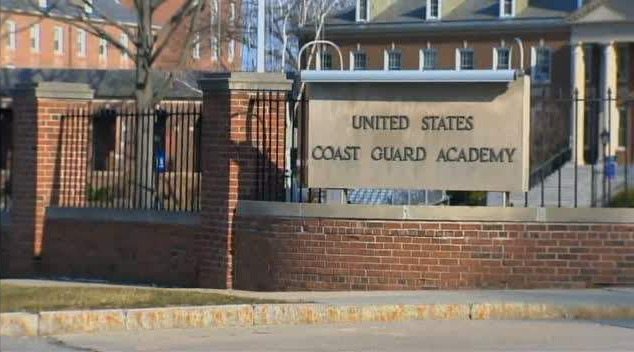 The U.S. Coast Guard Academy (USCGA) is located on 103 acres in New London, CT, situated along the Thames River. USCGA is an accredited institution offering four-year Bachelor of Science degrees for future Coast Guard officers. USCGA tuition is covered by the U.S. Coast Guard and in exchange, students (cadets) agree to five years of active duty service after graduation.

The U.S. Coast Guard Academy has an interesting history. The idea to create what would evolve into the Coast Guard came from Alexander Hamilton who wanted to create a maritime military branch he dubbed, the Revenue Marine. From this idea sprung the very first Coast Guard Academy which was located on the Dobbin, a schooner from Baltimore that housed the Revenue Cutter School of Instruction, and saw its first students board in 1876.

In 1890, the the Coast Guard Academy settled on land and established a base in Maryland; 20 years later, the site moved once again and settled in Connecticut. The USCGA as we now know it was born in 1915, with the current site having been donated by New London residents in 1932. The U.S. Coast Guard is the oldest global search/rescue life-saving service in addition to protecting natural resources and wildlife and providing national defense when called upon.

In 1946, the Coast Guard Academy received a 295 foot tall ship as part of Germany's WWII reparations, called the Horst Wessel, renamed the USCGC Eagle. Today, the Eagle is the primary training ship for cadets at USCGA.

The Academy began accepting cadets of color in 1962 and women in 1976. USCGA is fully accredited by the New England Association of Schools and Colleges.

USCGA's acceptance rate is low. In other words, gaining admittance into the Academy is incredibly difficult. Though prospective students don't need a congressional nomination to apply, they must be at the top of their classes since they are competing with more than 2,000 other prospects every year. Out of all of these applicants, approximately 300 cadets are granted acceptance into USCGA. It is estimated that out of a class of 300, about 200 cadets will go on to graduate.

Cadets have options when it comes to their course of study. The following are the eight core majors offered at USCGA: Civil Engineering, Mechanical Engineering, Electrical Engineering, Naval Architecture/Marine Engineering, Operations Research and Computer Analysis, Marine/Environmental Sciences, Government and Management.

Cadets undergo rigorous training beginning with USCGA's Swab Summer where freshmen are sworn into the military and undergo seven weeks of training. Cadets also receive training aboard military vessels to gain first-hand experience navigating and maneuvering a ship through the open sea, damage control training, and weapons qualifications in addition to the many programs taught at the Academy.

Cadets can try out to become a Bear with one of USCGA's 24 sports teams (Division III), join a music program, or participate in Model UN. USCGA also offers various clubs celebrating different cultures and student interests.

There are a couple of options when it comes to housing at/near USCGA. Cadets all live on campus in the Chase Hall dorm. For personnel assigned to the Academy, there is Military Family Housing which offers two-, three- and four-bedroom homes while unaccompanied occupants have the option of choosing Bachelor Allowance Housing. Before signing any rental agreements, USCGA strongly suggests you reach out to the Housing Officer at (860) 444-8211.