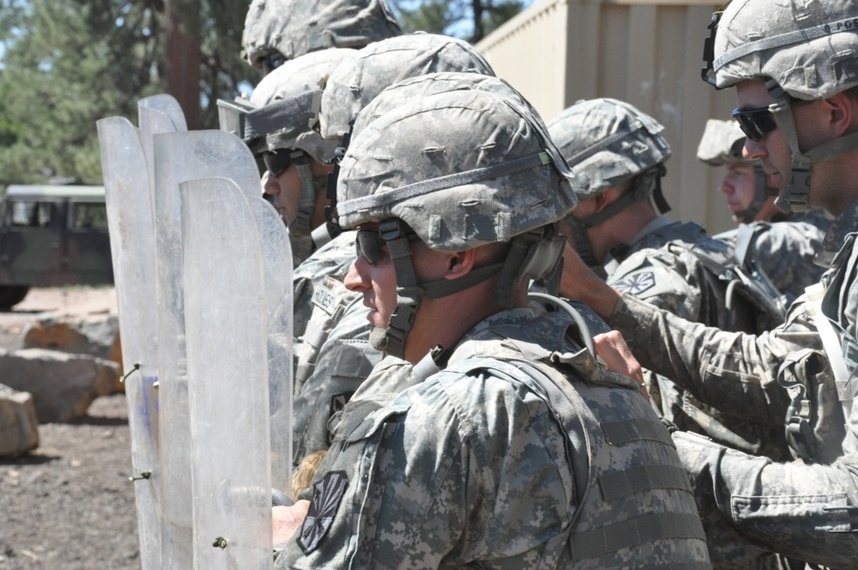 Camp Navajo is located in Bellemont, Arizona and has undergone various name changes since it was opened in 1942. Camp Navajo was originally called Navajo Ordnance Depot due to the fact that its primary function was munition storage.

In 1965, the base became Navajo Army Depot, then, in 1982, the name was changed to Navajo Depot Activity before finally being named Camp Navajo in 1993. The installation is under the direction of the Arizona National Guard (AZNG). On site units include the 362nd Ordnance Company (Explosive Ordnance Disposal, EOD), the 819th Engineer Company, the 856th Military Police Company and the 194th Engineer Detachment (firefighters).

Camp Navajo was completed in under a year and has been an active base since it opened in 1942. A total of 800 storage igloos, 50 administrative buildings, 227 miles of road and 38 miles of railroad track were added to the installation resulting in a final total cost of $19M.

In 2002, Camp Navajo was finally able to accept funding outside of the federal government per an amendment to a state statute; additionally, the amendment allowed Camp Navajo to conduct business in the commercial and civilian sectors.

Recently, Camp Navajo has been working on developing nearly 800 acres of land to create an industrial park in addition to replacing an antiquated water and electrical distribution system. Long-term, Camp Navajo is considering expanding their storage missions for the Air Force and Navy large rocket motor programs.

Some helpful phone numbers in Camp Navajo's directory include:

Camp Navajo has billeting and short-term housing on a first-come first-served basis. The billeting office is open Monday through Friday from 7a-3:30p and can be reached at (928) 773-3152. Nearby hotels include:

There are also some higher education options available in the area including Coconino Community College (928) 527-1222 and Northern Arizona University (928) 523-9011.

Lava River Cave (928) 527-3600 is a mile-long lava tube cave that's nearly 700,000 years old. Visitors are encouraged to exercise extreme caution as the cave is slippery and can be quite chilly--even during the summer months.

Lowell Observatory (928) 774-3358 was established in 1894 and is an independent, non-profit research institution. Visitors can watch multimedia shows, exhibits and live presentations in an immersive theater in addition to taking tours.

Also note that Camp Navajo has storage facilities for RV's and boats. For rates and more information, you can contact the Base Operations Supervisor at (928) 773-3124.