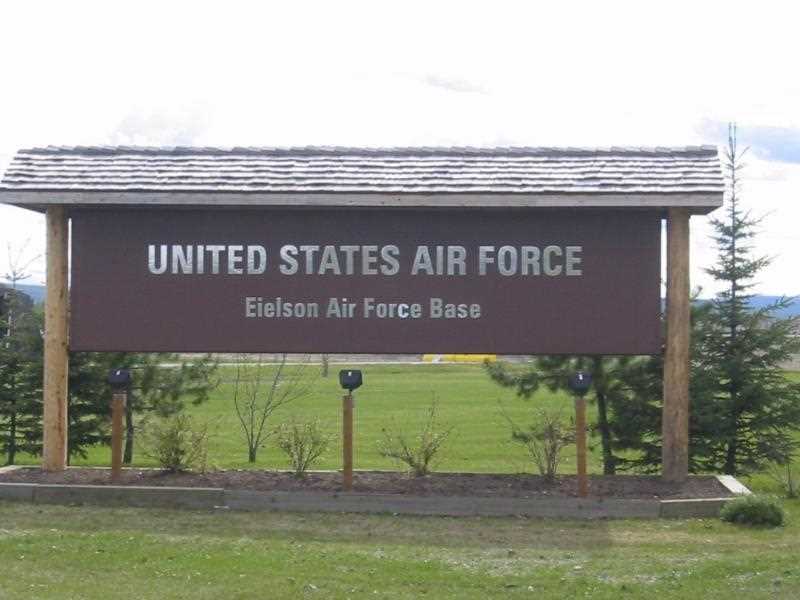 The Eielson Air Force Base is located 26 miles south of Fairbanks, Alaska. A short drive from the town of “North Pole”, the site can be quite chilly during the winter. From November to February, the average high is 6.7°F. However, the summers are very comfortable, as the average high rises to 70°F. The base is perfect for snow lovers - Eielson typically receives around 65 inches of snowfall each year. Eielson AFB is home to 5,400 people, including over 1,400 families.

The Fairbanks International Airport, 30 miles away, is typically used for transportation to and from locations in Alaska and the contiguous United States. Eielson AFB has a passenger terminal, with destinations including Japan and Guam. The official base address is 2070 Central Avenue Eielson Air Force Base, AK 99702.

During the beginning of World War II, the Western Defense Command (U.S. Army command responsible for Pacific Coast defense) ordered the formation of an airfield near Fairbanks. The base was constructed by October 1944, costing $8 million. Named “Mile 26”, after a local highway milepost marker, the base was not used much during the war. It closed down when the war ended.

Mile 26 was reopened in 1946 when the 57th Fighter Group was moved to the base. The 97th Air Mobility Wing soon occupied the base as well, bringing Boeing B-29 Superfortress heavy bombers. During this time, Mile 26 was renamed to Eielson Air Force Base in honor of Ben Eielson. An Alaskan native, Eielson was killed when his aircraft crashed while attempting to rescue an icebound ship in the Beijing Sea. The new host unit was dubbed the Eielson 5010th AFB Bomb Wing.

Eielson AFB was used heavily during the Cold War. The Air Defense Command deployed F-102 Delta Daggers and F-106 Delta Darts to Eielson, providing defense from potential Soviet bomber fleets. In 1981, the 343d Composite Wing replaced the 5010 BW as the host unit of Eielson. The 343d Wing possessed the Cessna O-2 Skymaster, which was used for air control and psychological operations. In 1993, the 354th Fighter Wing was activated as the host unit of Eielson, inactivating the 343d Wing.

The 354 Fighter Wing is the current main unit housed at Eielson AFB. The wing’s main mission is to prepare U.S. and allied aviation forces for combat, to deploy Airmen in support of global operations, and to enable the staging of forces to promote US interests in the Asia-Pacific region. The 354 FW is a part of the Pacific Air Forces, a major command of the U.S. Air Force, which aims to provide air and space power to promote U.S. interests in the Asia-Pacific region during peacetime and war.

When first arriving at Eielson, temporary lodging is available for military members and their families at the Goldrush Inn. Pets are allowed in certain rooms. However, availability is very limited. If traveling to Eielson, please make sure to contact the Goldrush Inn as soon as possible at (907) 377-1844.

Military family housing is privatized at Eielson. Corvias Military Lodging is responsible for maintaining and constructing the homes. Numerous floor plans and neighborhood amenities (including gyms, parks, and walking trails) are available at Corvias. For more information, click here.

Unaccompanied housing is also obtainable at Eielson AFB. UH is provided for unaccompanied Airmen E-4 and below by order of the Commander 354 FW. A private sleeping room, furnishings, bed linens, and supplies are provided while living in UH. For more information, click here.

Things to do & MWR

Eielson Air Force Base and the Fairbanks area offer many fun ventures, both inside and outside. The Natural Resources Office has all the information you need if you want to hike, fish, hunt, or do another form of outdoor recreation. They may be reached at (907) 377-5182.

Fairbanks has many enjoyable options, from catching a movie at the local theater to visiting the Ice Museum to shopping at the Bentley Mall.