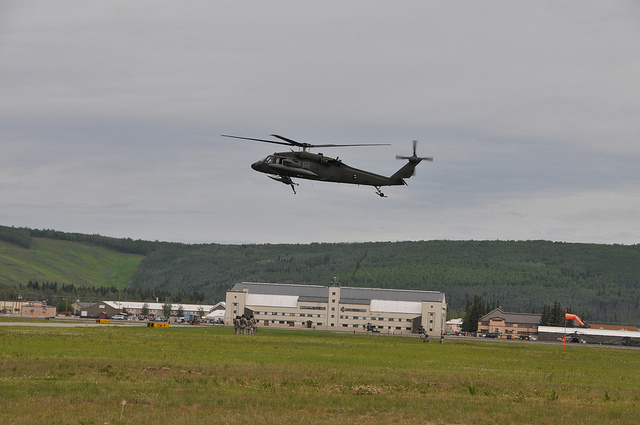 Fort Wainwright is a U.S. Army military installation in Alaska situated next to the city of Fairbanks. Originally named Ladd Field when it opened in 1939, it was renamed Ladd Air Force Base in 1947. In 1990, Fort Wainwright was added to the Superfund list (a federal program that funds environmental cleanup efforts) for their work clearing up water and soil contamination.

Fort Wainwright is conveniently located 23 minutes away from Fairbanks International Airport by car and is an hour and a half away from Fort Greely, another U.S. Army base in Alaska.

When Fort Wainwright opened, it acted as a cold weather station where military aircraft were tested to see how they performed in arctic climates. In 1961, the U.S. Air Force gave up control of this installation and handed it over to the Army; during this time, the base was renamed to honor General Jonathan Wainwright, a World War II Medal of Honor recipient.

Testing revealed that herbicides, pesticides and other dangerous chemicals were lingering just beneath the surface. For a while, construction was put on pause until the contaminated soil was removed and new soil was used to refill the contamination sites. It took three years (2007-2010) to clean up the area (even today, there's still contaminated soil on site) and in the summer of 2011, construction began once again. In 2015, Taku Gardens was renamed Tanana Trails.

Leaking chemicals again caused huge problems in the summer of 2006 as civilian construction workers began to notice "pungent, chalky" fumes that made them nauseous, gave them headaches and hospitalized over 30 people. Four of the construction workers experienced lasting effects of exposure to what a state health report referred to as "an unknown, volatile chemical" which "likely caused nerve damage to the disabled workers." The construction employees tried to file a lawsuit against the Army but the case was ultimately dismissed and the workers only received compensation from the state.

North Haven Communities (888) 347-2985 can help you find the perfect place to call home. They offer two-, three-, four- and five-bedroom houses for lease with amenities such as snow removal, 24/7 emergency maintenance, a community center and so much more.

If you're looking for something smaller than a home or just something temporary, Fort Wainwright has a Lodging and Billeting Office you can call for inquiries and reservations at (907) 353-7058.

There is also a Holiday Inn Express (907) 353-3800 on base at Fort Wainwright that can accommodate solo occupants and families.

You can contact the Fort Wainwright School Liaison Officer for questions about local school at (907) 353-9377 Monday-Friday from 8a-6p.

Things To Do / Places of Interest

Fort Wainwright is close to museums, cultural centers, scenic routes, walking tours, wildlife parks and much more. If you find yourself at Fort Wainwright in the winter, try to catch the stunning Northern Lights. In the summer, the outdoor activities are endless—you can take a nature hike or spend the day kayaking and check out some wildlife viewing spots to glimpse untouched Alaskan wilderness.

The Fort Wainwright Commissary (907) 353-6218 is available for your basic shopping needs. Just keep in mind, you must be accompanied by an authorized person.

Fort Wainwright's MWR programs fit varied interests and include activities for the entire family. You can reach the MWR Administrative Office at (907) 353-7615 from 9a-5p Monday through Friday.