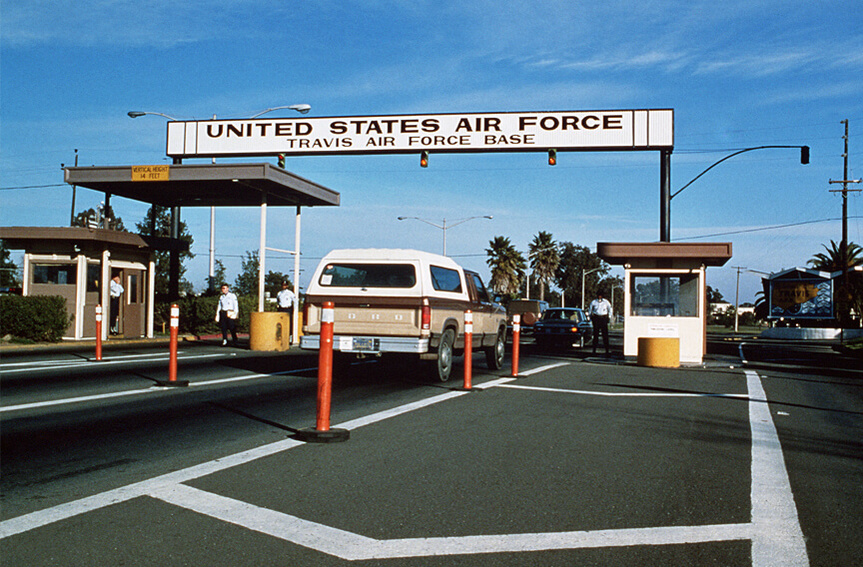 "Gateway to the Pacific"

Travis Air Force Base (AFB) is located in Fairfield, California on 6,258 acres and falls under the jurisdiction of the Air Mobility Command (AMC), an organization that provides global air mobility to the nation's armed forces. Nearby posts include Beale Air Force Base.

Travis AFB was originally named Fairfield-Suisin Army Air Base and became Fairfield-Suisin Air Force Base before finally becoming Travis AFB. The original names came from two nearby towns in the area. Travis AFB had humble beginnings as a piece of land with an airstrip on it and has grown to become one of the largest Air Force bases on the west coast.

Construction began in 1942; the Army Corps of Engineers built a runway and temporary facilities were erected. Initially, the premises were used by Army and Navy pilots to practice takeoff and landing. Travis AFB was after Brigadier General Robert F. Travis, acting Commander of the 9th Heavy Bombardment Wing and Travis AFB's Commanding General, who died when his B-29 crashed on site in the summer of 1950.

Travis AFB officially opened in the summer of 1943 and quickly grew as military commander saw the potential for the post to become a major port and transfer point given its strategic location. By 1945, Travis AFB was responsible for most of the airlifting of servicemen and supplies to Japan and Korea in addition to processing soldiers who were coming back home. Travis AFB also lent support to Europe and assisted with the Berlin Airlift.

Travis Family Homes provides you with a couple of options including move in ready two-, three-, four-, five- and six-bedroom homes in both single-family and townhome styles. For leasing questions, call (866) 971-1719.

Travis AFB is located close to multiple schools. If you have questions about where your children are eligible to attend school, call the School Liaison Office at (707-424-2486).

The Airman and Family Readiness Center provides servicemen and women and their families with services and information including financial services counseling, employment assistance, transition assistance and school liaison activities.

Travis AFB is home to the Jimmy Doolittle Air & Space Museum, formerly known as both the Travis Air Force Base Heritage Center and the Travis Air Museum. Visitors can check out over 35 plane and artifact displays in addition to learning about local history.

Note that all visitors have to be at least 18 years old to visit and will have to show valid ID before being granted admission.