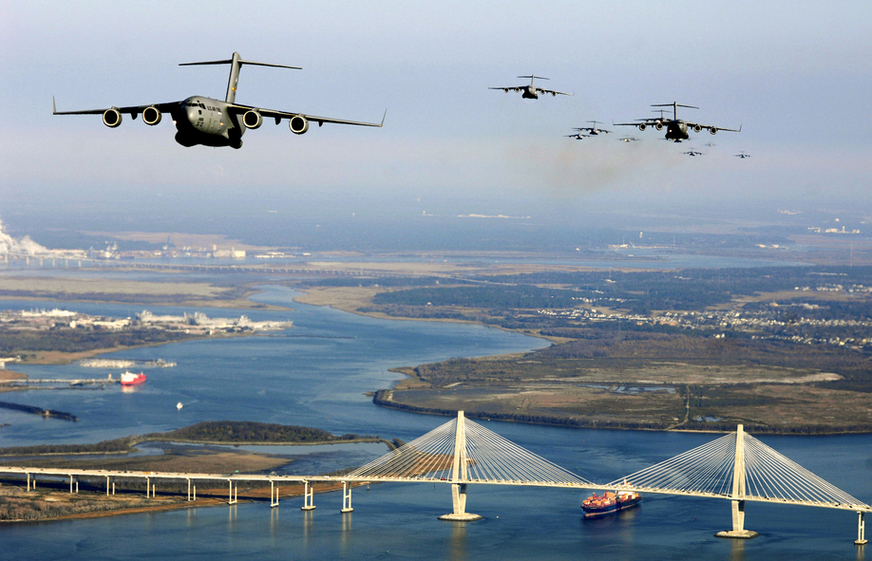 Joint Base Charleston, known as the "Launch Point for the Nation's Resolve," is spread across two South Carolina cities: Goose Creek and North Charleston. Charleston International Airport shares a runway with JB Charleston and is a mere seven minute drive from the base. For security reasons, there are no shuttles that run from the airport to the base.

JB Charleston was established in October of 2010 and is a result of the 2005 Base Realignment and Closure Commission's decision to merge two separate military facilities: Charleston Air Force Base and Naval Support Activity Charleston. JB Charleston is under the command of the U.S. Air Force.

Before merging with Naval Support Activity Charleston, Charleston Air Force Base began as an airfield on rented land. Colonel Herbert A. Dargue surveyed the land in his search for the perfect space to establish a landing field. The city of Charleston saw commercial potential in the land and created the Charleston Aircraft Corporation with the intention of opening a municipal airport.

As the U.S. faced its second World War, Charleston AFB continued their land acquisition efforts and used an allotment from the War Depart to extend the runway and make improvements to the facility and the nation prepped for war. Charleston AFB also supported troop carrier operations with funding from Congress during the Cold War.

Dubbed the U.S. Naval Ammunition Depot (NAD) in 1941, NSA Charleston sits on over 17,000 acres of land and features piers, waterfront views and a railroad.

During World War II, this post served as an ammo collection and distribution facility. Afterwards, NSA Charleston was responsible for removing ordnance from warships and used as a storage space. In 1988, JB Charleston became home to the Naval Nuclear Power Training Command--a program that still runs today.

JBC Family Housing is a good place to start looking for family housing. Properties are professionally managed and you can begin searching for your home with the online navigator. The JBC Family Housing Management Office can be reached at (843) 552-0600.

Joint Base Charleston Housing is another housing option you can choose from. JBC Housing features privatized housing, unaccompanied housing and community housing. The JBC Housing Management Office can be reached at (843) 963-3858.

Hotels near JB Charleston include the Hyatt Place North Charleston, Embassy Suites by Hilton Charleston Airport Hotel and the Residence Inn by Marriott Charleston--all of which include free daily breakfast and sit within minutes of the post.

JB Charleston is located near three separate school districts: Charleston, Berkeley and Dorchester. Your home address will determine where you child ends up going to school; note that there are no on-base schools.