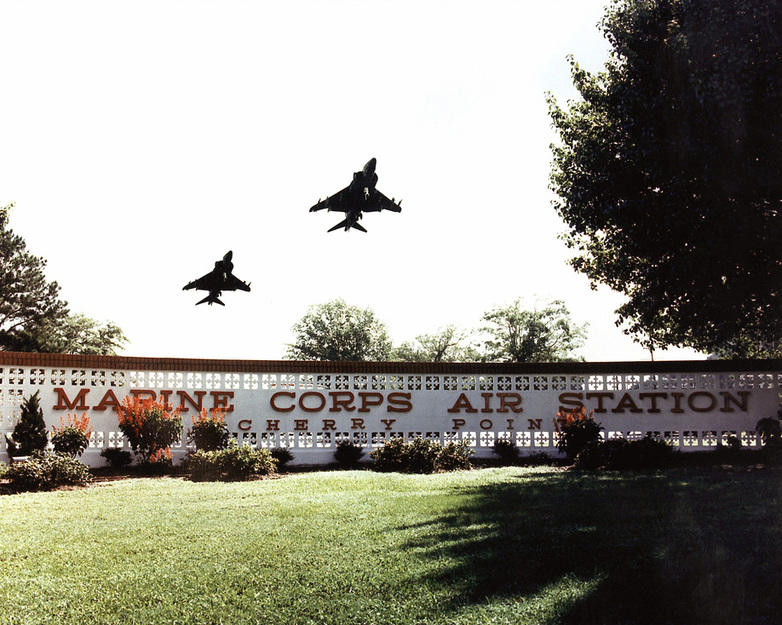 Marine Corps Air Station (MCAS) Cherry Point is located in Cherry Point, North Carolina and is the world's largest base of its kind. When visiting Cherry Point, look for the famous "Pardon our noise, it's the sound of freedom" sign referring to the rumble of the jets overhead. Cherry Point's mission is aerial wartime and emergency readiness.

Established in May 1942, MCAS Cherry Point was built on 8,000 acres encompassing farm and swampland. Congress set aside nearly $15 million to build the site and settled on Cherry Point due to the high amount of sunshine the area received. Although the area is susceptible to dangerous environmental events such as hurricanes and a large number of mosquitoes, the overall sunny weather provides excellent flight practice conditions.

Just a few weeks after construction began, the attack on Pearl Harbor occurred; this event pushed crews to complete the site as quickly as possible to aid in wartime preparations. In mid May of 1942, Cunningham Field became U.S. Marine Corps Air Station Cherry Point.

During the Korean War, Cherry Point deployed airmen and maintenance crews to support the war effort. Cherry Point also provided support during the Vietnam War by deploying Grumman A-6 Intruder jets in addition to supplying a steady flow of replacement airmen when needed. MCAS Cherry Point was also a major player during Operations Desert Storm and Enduring Freedom by providing jet squadrons for both efforts.

Today, Cherry Point remains a very active base. In addition to featuring a large runway that allows for multiple landings, MCAS Cherry Point is also known for the length of its runways; in fact, when NASA was still operating the space shuttle program, they used Cherry Point's runways for emergency landings because of their length. In 2015, the site allowed access to additional airspace for military, civil and commercial purposes.

MCAS Cherry Point offers up rec and entertainment programs for servicemen and women and their families. Some of the things you can enjoy include movie nights, live music and plays, a fitness center, pools, a theater and a library.

There are also restaurants and food trucks on site as well as shopping options.

Is there a commissary?

What about housing at Cherry Point?

Yes, MCAS Cherry Point offers a few different housing options. For single Marines, there are barracks that are similar to dorm rooms; family housing at Cherry Point is privatized.

Where can I find employment opportunities?

This is a good place to start. You'll be able to upload documents like your resume and cover letters and fill out online applications.

When is the annual Air Show?

The 2018 Air Show will occur May 4-6 and will feature fireworks, food and beverage vendors and free parking and admission.