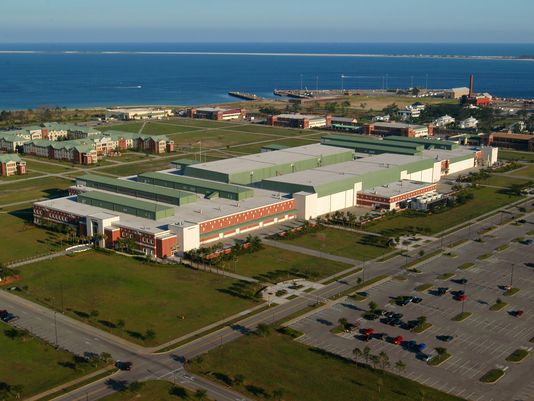 Naval Air Station Pensacola is located in Pensacola, FL.  It is often called the “Cradle of Naval Aviation” and is home to the famous Blue Angels flight demonstration team. The base is located close to many gorgeous beaches including world famous Pensacola Beach. It’s a small base but there is a lot to do.

NAS Pensacola is one of the largest training bases in the Navy. It houses many technical schools for the Navy and trains military members from other branches of service. Army Cyber and Signal soldiers complete many Advanced Individual Training courses at Corry Station. Corry Station is part of NAS Pensacola but is located at an adjunct complex a few miles from NAS Pensacola.

NAS Pensacola is full of history. The area that now houses NAS Pensacola has been a popular military spot commandeered by different countries since the 1500s. Because of the prime location of the spot, which sits close to the Gulf of Mexico, it’s been a valuable military and commercial holding for centuries. Don’t miss spots located directly on the base include The National Naval Aviation Museum, Fort Barrancas, and the Pensacola Lighthouse and Museum.

There are two primary gates to access NAS Pensacola. Incoming military members and families should use the Navy Blvd. gate which is located across a small bridge from Pensacola proper. Anyone that doesn’t have a CAC card, dependent ID, or valid visitors pass needs to use West Gate located off of Blue Angel Parkway. Visitors need to stop at the Visitor Control Center and get a pass to get on the installation.

Because the main gate on Navy Blvd. is accessed by a bridge the traffic can be very heavy during early morning and late afternoon hours.

Corry Station is an adjunct facility that is controlled by NAS Pensacola but is not situated on the actual base. The BX and commissary are located on Corry Station and there is housing on the Station as well. The BX and commissary are located in an open access area. But in order to get into the housing areas or into the secure training areas a DoD ID, CAC card or dependent ID is needed.

The weather is beautiful almost year round although it does get warm and humid in the summer. But Pensacola is an outdoor lover’s paradise. The base is less than 30 minutes from Pensacola Beach which has many attractions for families like museums and amusement parks, shopping, and a full complement of beach activities.

But closer to base is two well kept secrets. Johnson Beach, which sits right on the Gulf, is less than 10 miles from base and is the perfect spot to relax, sail, swim, and fish. It is a public beach. Directly next to Johnson Beach is Gulf Island National Seashore. Gulf Islands is a national park that is free for servicemembers and families. There are miles of white sand beaches and gorgeous surf. Camping is allowed at Gulf Islands National Seashore and there are boat rentals and other fun things to do as well.

NAS Pensacola has the perfect mix of big city amenities and outdoor activities. The great weather, amazing beaches, and proximity to all the culture of a big city makes this a base that very few people want to leave.