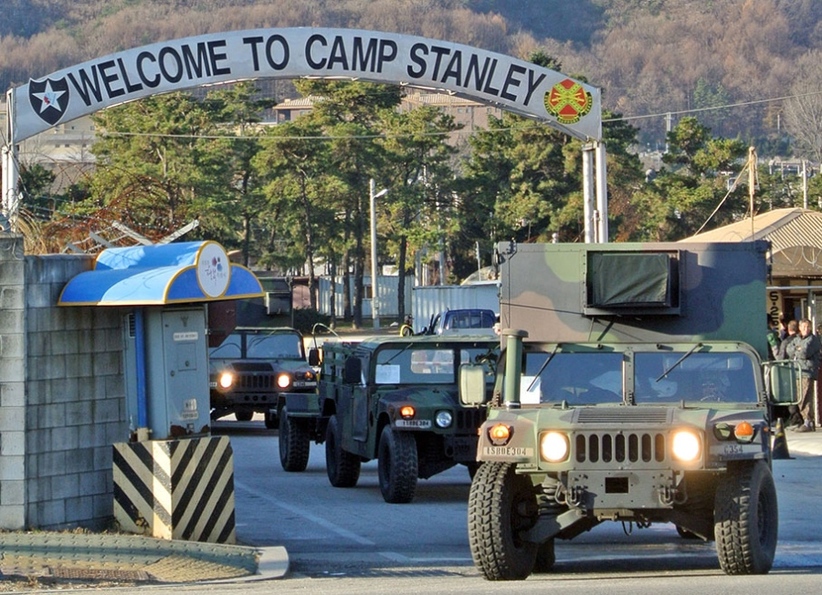 Camp Stanley is located in Texas about twenty miles away from San Antonio and makes up half of the Leon Springs Military Reservation--the other half is comprised of the Camp Bullis Military Training Reservation.  Camp Stanley is home to the Camp Stanley Storage Activity (CSSA), a space many believe to be an arms depot running untraceable weapons operated by the C.I.A.

According to various news outlets, the CSSA is actually the mysterious "Midwest Depot," a stockpile of weapons provided by the U.S. government to rebels in places like Angola, Nicaragua and Afghanistan. Declassified documents support the claim that the CSSA had a hand in arming Cuban exiles during the Bay of Pigs invasion although representatives for the C.I.A. and Pentagon have declined to make any comments. Local politicians also denied having any knowledge of Camp Stanley housing a C.I.A. arms cache. The Camp Stanley location in the United States is not to be confused with the U.S. Army base of the same name in South Korea.

Camp Stanley has a colorful history. It acted as an ammunition warehouse and saw Chinese refugees (who would eventually be granted citizenship by the U.S. in 1922) pass through its gates in 1916 from Mexico with the help of General John J. Pershing. In 1933, control of Camp Stanley was handed over to the Ordnance Department who immediately had new facilities built on site. In the summer of 1947, Camp Stanley merged with the San Antonio General Distribution Depot and two years later became a designated class-two base.

Camp Stanley was formerly known as Camp Funston, named after Major General Frederick Funston who served in the Spanish-American War and the Philippine-American War and died in 1917. This Camp Funston--although named after the same person--is not the same as the Camp Funston in Kansas. In 1917, the installation's name was changed to Camp Stanley so as to avoid confusion with the Kansas base. Camp Stanley was named after Brigadier General David S. Stanley, a Union leader during the Civil War who received a Medal of Honor for his efforts in aiding troops in dire need of reinforcements.

Camp Stanley is reputed to be a site of weapons testing and disposal (including chemical/biological weapons) and activity in addition to providing storage. In 2011, former C.I.A. official Kevin Shipp sued the Central Intelligence Agency for negligence claiming that he and his family, who had lived on site at Camp Stanley ten years earlier, became sick from being exposed to toxins that had not been disposed of properly. In 2001, Camp Stanley officials provided bottled water to residents in close proximity to the base because the drinking water in a local aquifer had become tainted with toxic runoff from Camp Stanley. Kevin Shipp quietly sent samples from his house at Camp Stanley to a Texas Tech scientist who confirmed that the samples contained toxic mold. Shipp wrote a memoir but a lot of the information within the book was redacted by a C.I.A. pre-publication review board.

In early 2010, Camp Stanley officials submitted a request for environmental cleanup that stressed the need for anyone working on the cleanup project to have at least a secret security clearance because Camp Stanley "stores large quantities of arms and ammunition and has sensitive missions, thus access to the installation and security clearance requirement for long-term personnel are much more restrictive than most military installations."

Jobs - As of July 2017, there were no public postings for jobs at Camp Stanley/the Camp Stanley Storage Activity.

Some nearby lodging options include: La Quinta Inn & Suites San Antonio The Dominion (210-564-6700) which offers a pool and free WiFi.

Residence Inn by Marriott at the Rim San Antonio (210-561-0200) is pet friendly, offers a free shuttle to local attractions, free hot breakfast buffet and free internet in the rooms.

Six Flags Fiesta Texas (210) 697-5050. This 200 acre theme park has something for everyone with rides, games, live performances and fireworks in the evenings. To get discounted military tickets, you will need to purchase them from your local Morale, Welfare and Recreation office--a good place to look in the San Antonio area is the Joint Base San Antonio (JBSA) which can be reached at (210) 221-1211.