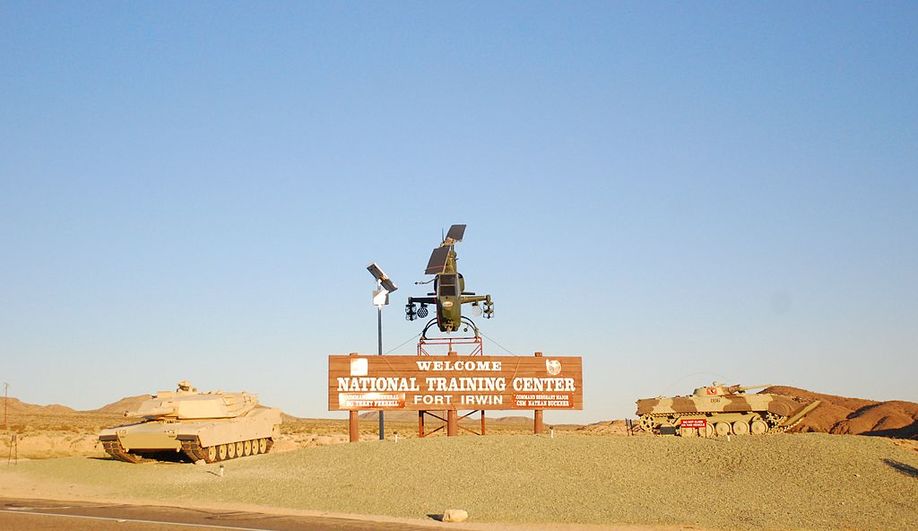 Fort Irwin, CA is located in the Mojave Desert and is the mecca of all things training for the United States Army. Each month the National Training Center pushes more than 4,000 Soldiers from other installations through the realistic training necessary to maintain readiness.

Jedediah Smith, a fur trapper, is thought to have been the first American to explore the area known as FT. Irwin as early as 1826. Bitter Springs, on the eastern edge of Fort Irwin, was a favorite stop among pioneers traveling the Old Spanish Trail between Santa Fe and Lost Angeles.

The California Gold Rush brought many travelers and prosperous trade opportunities. As California continued to grow, more travelers used these trails and passageways. The 1880s brought with it a great economic boom due to the discovery of borax at Death Valley. The area grew tremendously as mining operations of all types flourished. Railroads, businesses, and an influx of workers led to the establishment of the nearby town of Barstow.

In 1944 Camp Irwin was closed and placed on surplus status. Camp Irwin reopened in 1951 to serve as a training center for units during the Korean War. It was primarily used as an armored combat training area, as tank companies of the 43rd Infantry Division from Camp Pickett, Virginia were among the first units to utilize Camp Irwin as a training center.

In 1961 Camp Irwin was recognized as a permanent military installation and renamed Fort Irwin. Again, during the Vietnam War it was used as a training center for primarily artillery, engineer, and armor units. However, following the Vietnam War, Fort Irwin was deactivated and California National Guard assumed full responsibility of the post in 1972. Fort Irwin was used as a training facility for the National Guard and United States Army Reserve from 1972 to 1980.

On August 9th, 1979, the Department of the Army announced that Fort Irwin had been selected as the site for the National Training Center. Fort Irwin was the ideal location due to its’ isolated location, 1000 square miles of training space, and airspace restricted to military use.

Single Soldiers E5 and below are housed in unit barracks. The Single Soldier Housing office (SSHO) is located in Building 312 on the corner of First and F Streets next to Starbucks, and can be reached by calling (760) 380-7789.

Single Soldiers E6 and above may reside in the Town Center Terrace (TCT) suites on post, or find off-post housing with help from the RCI Housing Services Office. Rent for a TCT suite is equal to a Soldier’s without dependent BAH rate. TCT’s include a stove, refrigerator, dishwasher, microwave, and stackable washer/dryer. The application documents required to be placed on the TCT waitlist are the same as the family housing documents. Geographical Bachelor’s E6 and above may apply to be placed on the TCT waitlist, however priority is given to bachelors. The rent is still based on the Soldier’s BAH without dependent rate.

The Villages at Fort Irwin accepts advanced applications for housing prior to arrival. The documents required to be placed on the waitlist include a completed housing application, a signed pet policy agreement, a current LES, a PCS Leave Form, and a DD1172 (DEERS Form). The documents can then be faxed to The Villages at (760) 386-3700. For information on assignments, wait lists procedures, floor plans, and policies contact The Villages at (888) 828-4144. The Villages’ office is located at 4533 Tippecanoe St.

For general relocation information to include military housing, off-post housing, schools, or for assistance with specific questions or concerns contact the Fort Irwin Housing Services Office (Building 109 in the Reception Campus) at (760) 380-3576. The office has numerous listings for housing in the local community areas.

The on-post schools consist of the following schools:

Check-in begins at the administration section in BLDG 15. After 4:30 p.m. on weekdays, weekends, and holidays, personnel should report to the BDO in Base Headquarters, BLDG 15. The BDO’s phone extension is: 760-577-6749.

Temporary lodging is located in the Oasis Temporary Lodging Facility (TLF) for short-term housing accommodations for military members, their families, and guests. The TLF office is located at BLDG 185 and can be reached at: 760-577-6418.

The Child Development Center (CDC) is located at BLDG 372. It is open to children of all active-duty military personnel, Department of Defense civilian employees, and DOD contractors. Full-day care, part-day care, and hourly care for children six weeks to five years are offered. For more information call: 760-577-6287.

In the immediate vicinity is Barstow, CA. Barstow is going to be the nearest decent sized city, with a population of 24,000 people. It is a 45 minute drive from post. Barstow is sometimes referred to a dusty jewel of the high desert. It is a tranquil and peaceful town where families can avoid the distractions and demands of large cities.

The Barstow Station is a popular stop amongst travelers. It is a shopping complex made up railroad cars and includes a lottery center, dining facilities, and gift shops. It is also home to a number of outlets to include: Polo, Nike, Reebok, Coach, and Loft.