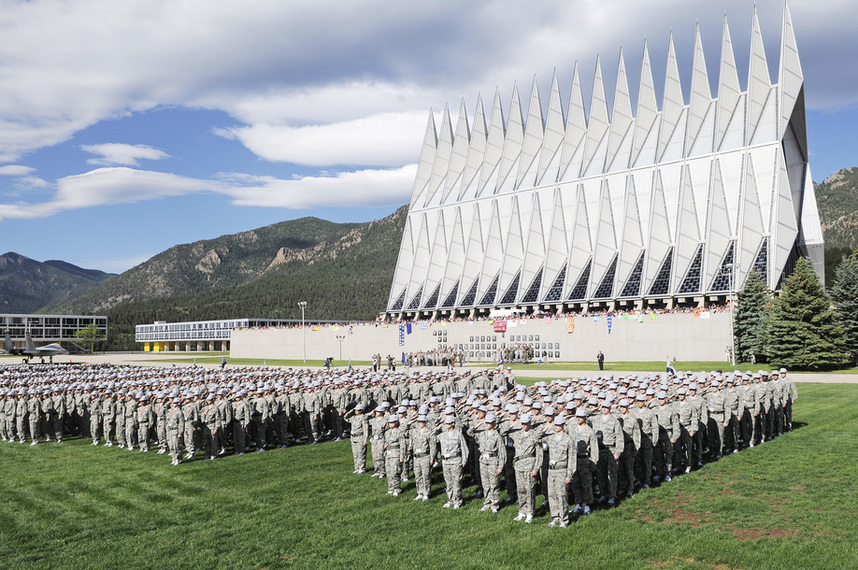 Situated on the base of the Rocky Mountains, the United States Air Force Academy (USAFA) is one of the few military academies in the country. The academy, spreading over 80,000 acres, is situated northwest of Colorado Springs, Colorado. Established in 1954, the installation is both a university and military organization. The main mission of the Air Force Academy is to educate, train, and inspire men and women to become leaders of character, motivated to lead the United States Air Force in service to our nation.

The Colorado Springs Airport, under 30 miles from the USAFA, offers domestic flights from both the East and West coasts. The Denver International Airport, around 80 miles north, provides a wider variety of flights from around the world. Either way, transportation to the Academy is pretty accessible. The institution attracts over one million tourists yearly, making it Colorado's top tourist site.

The push for an academy specifically for the U.S. Air Force traces back to the early 20th century. In 1919, a bill was proposed in the House of Representatives to create an Air Force Academy, but it failed due to cost and curriculum concerns.

Following the passage of the National Security Act of 1947, the Air Force was deemed a separate branch within the U.S. military. This led to a bigger push for an Air Force Academy, as other branches of the military (such as the Navy and Army) already had such institutions. Seven years later, Congress passed legislation to create an Air Force Academy. The bill was signed into law by President Dwight D. Eisenhower. Construction at a site near Colorado Springs quickly began.

Since there were no upper class cadets to train the younger cadets, graduates of West Point and Annapolis were appointed “Air Training Officers”. The cadets’ uniforms were designed by Hollywood designer and director Cecil B. DeMille - symbolizing the academy’s modern feel. The first class of cadets graduated in June 1959.

The Vietnam War caused the academy to significantly grow, as the need for fighter pilots grew. The number of cadets on base tripled between 1960 and 1970. Facilities and training efforts were expanded to reflect the war effort. Many graduates of the USAFA served in Vietnam, resulting in over 140 graduates being killed and 33 being captured. The academy, which is open to the public, was often the site of protests during the anti-war movement.

In 1975, Congress and President Gerald Ford passed legislation allowing women to enter U.S. military academies. In 1976, over 150 women, apart of the Class of 1980, entered the Air Force Academy. In 1994, Lt. Laura A. Piper was the first female USAFA graduate to die in combat after the helicopter she was in was shot down in Iraq. Female enrollment has steadily risen over the years, with women representing 25% of the Class of 2016.

The academy turned 50 years old in 2006. A $1 billion renovation and construction plan began to update the grounds, with a focus on energy efficiency and sustainability. The USAFA continues to value renewable energy and finding new ways to use natural resources.

Nearly 10,000 students apply to the USAFA every year for a class of around 1,200. With an admission rate below 12%, applicants must be competitive in all areas. The average SAT score of an admitted student is a 1310 and an average ACT score is a 30. GPAs are very high as well - ½ of admitted students are in top 10% of their class. Leadership skills and extracurriculars are extremely important, as most admitted students are in school clubs or sports.

Fitness is another important part of the applicant process. All applicants must complete the Candidate Fitness Assessment, a rigorous test of strength, agility, speed and endurance. The six exercises on the assessment include a one mile run, Basketball throw, pull-ups/flexed arm hang, shuttle run, modified sit ups, and push ups. Additionally, applicants must also train for the Basic Cadet Training. BCT is designed to push the limits of anyone in any physical shape. To be in excellent condition, cadets should be able to run 5 miles comfortably when they arrive to base.

Whether you simply want to visit the country's youngest military academy or have hopes of attending one day, tours are available for you.

Escorted tours are available for students interested in attending the Academy. The tours truly show you what life at USAFA is like, from meeting with an admissions officer to taking a guided walk around campus. Visit the Academy's website to sign up for a tour.