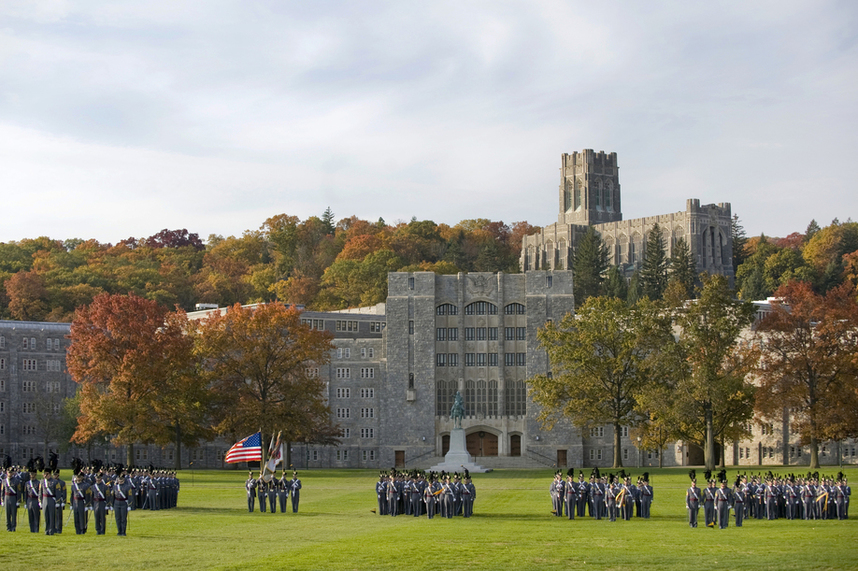 West Point Military Academy is one of the four U.S. Military service academies and has served to train aspiring armed forces for over two centuries. The facility goes by a variety of names, such as the United States Military Academy (USMA), The Academy, and The Point, but is most commonly connoted with its location in West Point, New York. The academy was strategically placed above the Hudson River as a fort to fight against potential attacks after the American Revolutionary War.

The academy was established in 1802, by President Thomas Jefferson. This decision came nearly two decades after the Continental Army’s occupancy of the site, then known as Fort Clinton. The rigorous curriculum that the academy is now known for was put in place by Colonel Sylvanus Thayer in 1817. Though the school originally specialized in engineering, it has since expanded to train U.S. services men and women in a wide range of fields.

West Point Alumni fought and led in many wars. In fact, every one of the 60 major Civil War battles was commanded by a West Point graduate. Some famous alumni over the years to come included:

The class of 1943 graduated early due to the high demand for soldiers during World War II, a war which featured West Point graduates in four of five of the five-star general ranks. The Korean War did not interfere with graduation at West Point, but still was comprised of West Point graduates in over 50 percent of U.S. Army leadership positions. This is a testament to the difficulty and high level of excellence required to graduate from West Point.

Though West Point’s curriculum and involvement in major wars has evolved over the years, its mission to educate, train, and inspire the Corps of Cadets has remained the same.

The school is extremely selective, with a remarkably low acceptance rate of just 9%.  To remain competitive, an applicant must exceed West Point’s GPA and SAT/ACT standards. The average incoming GPA is 3.74 and average SAT scores range from 1250 (25th percentile) to 1440 (75th percentile). Just to apply to West Point, prospective applicants must obtain a nomination from a current U.S. Congressman or Senator.

The school does not solely base its acceptance upon academic standards, as it also values physical ability. In order to be accepted, one must complete the Physical Aptitude Examination, consisting of pull-ups/flex arm hang, basketball throw, the standing long jump, a 300-yard shuttle run, and two-minute period of pushups.

West Point offers a fully funded four-year college education and an additional $7,200 per month to cadets, so tuition rates are typically not a concern. The median salary of West Point graduates is among the highest in the country, at around $120,000 per year.

West Point is accessible from several modes of transportation, from bus and rail to car. If driving, click here for details on how to reach the school.

Other options for guests include:

Things to do Around West Point

If you are in the area and wish to take part in more than just a campus tour, there are several opportunities for outdoor recreation and dining in and around the town of West Point. For more information,  click here.