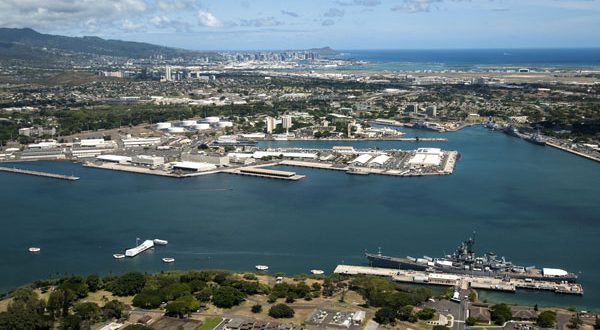 Joint Base Pearl Harbor-Hickam (JBPHH) is the result of the 2010 merging of Naval Station Pearl Harbor and Hickam Air Force Base and is located in Oahu, Hawaii.

Pear Harbor was continuously passed over as a potential Naval base because of the shallow waters near its entrance making it extremely difficult for vessels to dock there. The Hawaii-United States Convention of 1884 changed this as the King of the Hawaiian Islands gave the U.S. exclusive rights to enter Pear Harbor in addition to granting the U.S. space for coaling and to build a repair station where U.S. ships could receive maintenance and upkeep. The Convention also gave the U.S. the right to "improve the entrance to said harbor and do all other things needful to the purpose aforesaid."

The U.S. Navy took control of Pearl Harbor in the winter of 1887 and in the early 1900's, construction efforts began on a dry-dock. Additional construction efforts such as the deepening of channels and lochs would follow shortly after as the Navy prepared to begin docking some of their largest vessels at Pearl Harbor. Construction was completed in 1919 totaling $5 million. Pearl Harbor was named a National Historic Landmark on January 29, 1964. Due to tensions with Japan and the beginning of World War II, the U.S. Pacific Fleet was permanently relocated to Pearl Harbor in February of 1941.

"A Date Which Will Live in Infamy"

On December 7, 1941, Japan bombed Pearl Harbor in an attack that crippled the Pacific Fleet; 2,368 people were killed, four battleships were sunk and another four ships were badly damaged. Although the loss of life and vessel damage were devastating, little damage was done to Pearl Harbor’s infrastructure and efforts to rebuild and prepare for war began immediately.

Pearl Harbor continued to aid and support naval operations through the Korean, Vietnam and Cold Wars. Today, this base is fully operational and features memorials and museums inside of decommissioned ships.

Located near Honolulu International Airport, Hickam AFB is a part of the United States Pacific Air Forces (PACAF). The War Department purchased 2, 225 acres to build Hickam AFB at a cost of $1.1 million. The base was named after Lieutenant Colonel Horace Meek Hickam, a Naval officer who died in a landing accident when his Curtiss A-12 Shrike flipped over in Texas.

Hickam Field was opened in the fall of 1938; construction on barracks began in 1939 and in January of 1940, personnel began moving in. Hickam AFB featured the only airfield big enough to accommodate the B-17 Bomber and acted as the main airfield in the area.

During the attack on Pearl Harbor, Hickam AFB was blitzed by Japanese fighter planes to ensure that U.S. planes wouldn't be able to strike back. The base suffered heavy damages: 189 people were killed, 303 were wounded and multiple fighter planes were destroyed.

The merging was a 2005 Defense Base Closure and Realignment Commission (BRAC) decision. Pearl Harbor and Hickam AFB are in close proximity--both sit on Oahu's southern edge and were separated by a fence which was taken down on October 1, 2010 to celebrate the merging.

Hotels within 10 miles of JBPHH include:

You can visit the USS Arizona Memorial (808) 422-3399 or check out the Pacific Aviation Museum at Pearl Harbor (808) 441-1000. If you want to spend a day enjoying Hawaii's landscape, consider hiking the nearby trails or heading to the beach.

Joint Base Pearl Harbor-Hickam (JBPHH) is part of the Great Life Hawaii program that provides a full range of MWR activities and facilities including libraries, arts and crafts, outdoor recreation, beaches, marinas and so much more.

You can charter transportation for a day trip, participate in fitness classes and explore some of Hickam Harbor's offerings including surfing, snorkeling, paddle boarding and sailing. Hickam Harbor rec staff is happy to help you get situated and can be reached at (808) 449-5215.